When the first pitched battle of the American Civil War took place on his land, Wilmer McClean decided he ought to move with his family to somewhere safer....only to end up hosting the Union and Confederate commanders as they negotiated a peace deal four years later

Sunday, 9th April 1865 was Palm Sunday, but a group of men gathered in a living room in Virginia had more important things to discuss than the beginning of holy week. Among the men were Ulysses S Grant and Robert E Lee, the prominent Union and Confederate generals respectively, who were negotiating the terms of the southern army’s surrender in the American Civil War. Four years of bloodshed and turmoil was coming to an end, the tragedy of men fighting their own families was over, and there was a strange sense of events coming full circle. This was not least because, waiting in another room in the house and occasionally glancing anxiously towards the living room was the man who owned the house – a man who had previously lived on the very farm where the war began. He had moved his family 120 miles south in a bid to avoid getting caught up in the war, but found himself hosting the talks that ended it.

Who was the man? 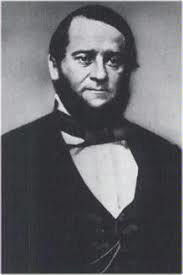 Wilmer McClean in the 1860s (wikipedia)

Had the generals chosen to meet in the house of an influential man who had one or both of their ears? Not really. The man was a small-time grocer named Wilmer McClean. According to Dr James Robertson, he was the eleventh of fourteen children, born in Virginia in 1814, and was orphaned before he was seven. Raised with his siblings by other townspeople, he joined the army when he grew up and fought in the Mexican-American war in the 1840s. He married Virginia Mason in 1850 and became a step-father to her three children from her first marriage, to a doctor whose considerable wealth was left to her upon his death. With the money and land his marriage had afforded him, he settled into a life as farmer.

How was he first exposed to the war?

Wilmer McClean and his family were living on a large estate called the Yorkshire plantation, near Bull Run in Virginia, in 1861. It was in that year that 11 southern states left the United States after the election of Abraham Lincoln to the presidency. These states were upset with Lincoln’s promise to prohibit slavery in the US’ new territories in the west, and seceded from the Union to form the Confederacy. The first shots of the war were actually fired in April at Fort Sumter in South Carolina, but it was not until the summer that a pitched battle took place. In mid-July, a large Union army marched south to meet their Confederate enemy in Virginia, and Wilmer McClean was caught right in the middle of what would become known as the First Battle of Bull Run.

To be fair, McClean initially seemed pleased to be in the middle of the action. A confederate sympathiser, he allowed the southern army to set up a field hospital on his estate and invited their generals to establish a headquarters in his family home. One account has it that a cannonball actually tore through the kitchen as the generals were sitting down for dinner, and, whether this particular anecdote is true or not, it seems as if the battle in general was enough to persuade McClean that he ought to move his family away from danger.

The McClean family upped sticks and moved 120 miles south to a small town called Appomattox Court House. Wilmer made ends meet by selling supplies to the confederate army, particularly food and groceries, but aside from that was happy that he was miles away from where any battle was likely to take place. The family lived in peace for the remainder of the war, but they would witness its end as they had its beginning.

On Saturday 8th April 1865, the confederate army under the command of General Robert E Lee was fleeing southward through Virginia, pursued by a Union army commanded by Ulysses S Grant. With his demoralised army surrounded, Lee signalled to Grant his intent to negotiate, and Grant in turn sent a band of men to find a suitable venue for the negotiations in the local area. So it was that Wilmer McClean opened the door to a Union soldier that evening, and was asked if he would host the two famous generals the following day. McClean was reluctant, but was made aware that Grant was not so much requesting the use of his home as he was demanding it. He had tried to run from the war, but he was powerless to stop the making of history in his home. 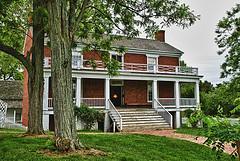 The war ended in the living room of Wilmer McClean's house, shown here as it stands today (ehistory.osu.edu)

On the afternoon of Sunday 9th April 1865, Wilmer McClean welcomed Robert E Lee and Ulysses S Grant into his home. The men talked in McClean’s living room and negotiated the confederacy’s surrender to the Union. The war was over, and the United States was preserved.

The McClean family fell on hard times after the war and were forced to sell the property in Appomattox Court House in 1867. They moved back to northern Virginia, where Robertson explains that McClean sold items of furniture as souvenirs from the Lee’s surrender. He would quip that the war ‘began in my front yard and ended in my front parlour’, a summary that was not far from the truth. He died in 1882, at the age of 68.