The Tay Bridge Collapse - Disaster on a Victorian Railway

On a stormy night in December 1879, a bridge that had been considered one of the engineering marvels of the world collapsed, sending over 70 people to a cold and watery grave 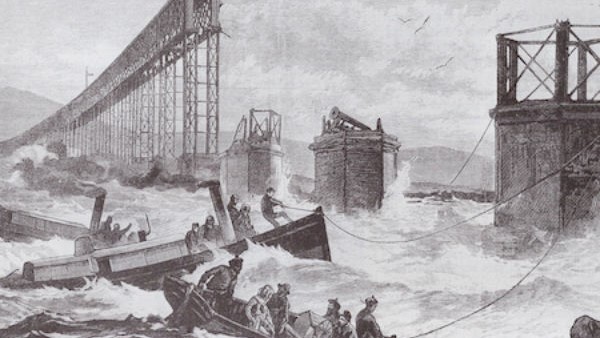 When the Tay Bridge opened in February 1878 it was one of the marvels of the world, yet another extraordinary feat of Victorian engineering. Dignitaries from across the globe visited what was at the time the longest bridge in the world, spanning nearly two miles over the Tay estuary near Dundee. Yet this was not even the most impressive aspect of the bridge, as it had been built over an extremely busy shipping lane and on soft bedrock under the river. Even to most engineers of the time, the bridge must have appeared almost too good to be true.

It was. On the evening of Sunday, December 28th, 1879, the middle part of the bridge collapsed during a howling storm, sending a passenger train tumbling into the freezing water below. There were no survivors. For days afterward, divers scoured the wreckage and bodies washed up on the riverbanks, giving an official death toll of 75 people. But, since there was no official record of how many passengers were on the train, there is no way of knowing the true death toll. All that is known is that the disaster caused panic and turmoil in Scotland and shook the supremely confident Victorian engineering industry to its core.

The industrial revolution had seen an explosion in the population of British cities and in the transport links between them, and by the late 1860s the attention of engineers in Scotland had turned to finding a way to shorten the train journey from Edinburgh to Aberdeen. The journey usually took over seven hours, but developers reckoned they could reduce that to a little over four hours if they could bypass the long stretch of rail that took trains inland along the River Tay and then back out to the coast again. This stretch was necessitated by the Tay estuary, a stretch of the river near Dundee that was previously considered far too wide to be bridged. But there was no such thing as ‘too ambitious’ in British engineering in the 19th Century. The North British Railway company duly made plans for the construction of the necessary bridge, and the job of overseeing the project was given to Thomas Bouch.

As detailed by Godfrey Holmes, Bouch was a bizarre choice for the job. A former prodigy at the company, he had left a trail of shoddy work and dissatisfied clients all over Scotland throughout his career, yet somehow was chosen to head one of the biggest projects of the century. His appointment was the first step on the road to disaster.

Work began in 1872 and was completed after six years, having gone thousands of pounds over budget. However, this did not cause much concern for the directors of the North British Railway company as they were sure their losses would be outweighed by the gains they were set to make once passengers opted for the shorter journeys they could offer compared to their competitors. With the work complete and profits rolling in, Bouch was held in higher esteem than he had ever been and was even knighted for his incredible achievement. But right from the very start, warnings about the approaching disaster were abundant.

The Tay Bridge before its collapse

Again according to Godfrey Holmes, there was a ludicrous amount of warning signs that the bridge was a disaster waiting to happen. During the year and 10 months the bridge was operational, countless painters and maintenance workers reported how much the bridge would shake when trains passed, and these movements were measured to be far too large to be sustainable. The bridge also just looked frail, with its mix of timber beams and metal trusses, and it was a common assumption in Dundee at the time that the bridge would some day collapse.

The night of the disaster

In the end, the fate of the bridge was sealed by a perfect storm of events – literally. The weather on the afternoon of 28th December 1879 had been horrendous as a result of a storm on the North Sea. The wind was measured at 80mph in Glasgow that evening as a result of the same storm, so it is safe to assume that they were approaching 100mph, if not more, on the Tay estuary which opens out into the North Sea. The winds were unrelenting well into the evening and, combined with the months of traffic that had weakened the structure, made the bridge impossibly precarious.

When the train driven by David Marshall stopped at the signal box on the south side of the bridge just before 7:15pm, the signalman Thomas Barclay should have prohibited Marshall from continuing until the storm had relented. Indeed, Marshall probably would have been relieved if the decision had been taken out of his hands this way. Having travelled the same route before, he was surely worried about crossing the fragile bridge as it was being battered by such strong winds. As it was, Barclay was in a rush to authorise the crossing so he could get back to his shelter from the awful weather and tend to the fire he was stoking in his cabin, so Marshall continued, edging the train slowly onto the bridge. As he nervously resumed the journey, some of his passengers prepared to disembark at Dundee, while others chatted about their new year preparations and children played with the new toys they had got for Christmas. Some passengers likely gazed out of the window into the night, aware they were on the bridge and praying they would make it to the other side. The storm howled as the train moved cautiously, gradually disappearing into the darkness.

The signalman on the north side of the bridge had seen Barclay’s signal that a train was approaching and waited for it to arrive. And waited. And waited. When the train did not arrive, he came to the awful realisation that the bridge had finally done what it had been threatening to do since the day it was completed. It had collapsed. The signalman sent word to Dundee station that the train had not arrived on the north side of the bridge, but it was not until 10pm that the stationmaster persuaded a steamship to venture out into the stormy river and search for a wreckage. The crew of the ship found the wreckage, but no survivors.

Over the next few days, the wreckage – locomotive engine, five passenger carriages and a luggage carriage – were searched by divers and bodies were recovered. Other bodies, including that of driver David Marshall, were swept to the shore over the next few days. They were taken to Dundee, where hundreds of worried relatives had gathered in resignation more than hope. With the bodies counted and tallied against the tickets that were counted at the train’s last stop before the bridge, the official death toll was given as 75. However, there is no way of knowing exactly how many passengers were on the train when it plunged into the murky waters of the Tay river. 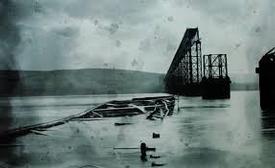 An inquiry was ordered immediately and found that the principal engineer on the project, Thomas Bouch, was chiefly responsible for the disaster because he had not allowed for sufficient wind strength when he designed the bridge. Bouch was ruined and died within a year, perhaps the 76th official victim of the disaster. However, some blame should be laid at the feet of the North British Railway company who ignored persistent warnings about the safety of the bridge. The same charge could also be levelled at the Board of Trade, who made a cursory safety check of the bridge when it opened but failed to check it again after that.

Not much is known about the victims of the disaster, emphasising the fact that they were normal people, a desperately unfortunate handful of the thousands who were travelling to and from their homes at that time of year. The bridge could have collapsed at any time before their train passed over it, but a perfect storm of events ensured that they had the dubious honour of being the last passengers to cross it.

'Thomas Bouch: Architect of the Tay Bridge Disaster', article by Godfrey Holmes, published by The Independent (2019)