The Great Fire of London

London's burning! A fire raged for four days and destroyed most of the old city - but allowed it to grow again as a greater city 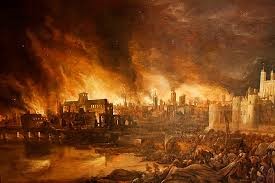 On the evening of Saturday 1st September 1666, Londoners may have looked at the stormy skies gathering in the East with a strange sense of relief. The summer had been long, hot and dry. London was running low on water supplies. It seemed that nature was going to intervene at last and re-invigorate a city that was facing a potential drought if it did not receive some rainfall soon.

That easterly storm would drift towards London, but no rain would fall that night. Within hours, the city was ablaze in an unprecedented fire that raged for four days and wiped out 80% of its buildings – including St Paul’s cathedral. Crammed together in narrow streets and predominantly made from timber, which was bone dry after the summer, the buildings stood little chance as the fire swept uncontrollably through the city. In the end it would take favourable winds and the mobilisation of a makeshift fire brigade that included the King himself to quell the fire, and London would be rebuilt with the stone and brick buildings we see today.

It began in a bakery on Pudding lane

Thomas Farynor ran a prosperous bakery on Pudding lane, near London Bridge, and could count King Charles II as one of his customers. He was awoken in the early hours of Sunday 2nd September by his workman, who had noticed smoke coming from the bakery downstairs. Farynor gathered his wife and children and managed to escape, leaving behind a maid who was too scared to clamber through the first-floor window the family had used. She was to become the first casualty of the fire.

Neighbours on Pudding lane would not have been especially concerned at first. Fires were a very common occurrence in London at the time, and most were put out easily. However, when the fire started to spread to the surrounding streets there was enough worry for the Lord Mayor of London, Sir Thomas Bloodworth, to be called to the scene. As Ben Johnson describes in his article for Historic UK, Bloodworth was unimpressed. Annoyed that he had been awoken from his sleep for such a mundane event as a fire, he declared that ‘a woman might piss it out’ and returned to bed.

However, by dawn London Bridge itself was ablaze. At the time, the bridge was home to numerous closely crammed timber buildings, exacerbating the problem. Mercifully, there existed a gap in the middle of the bridge separating the buildings on the north side of the bridge from those on the south. This ensured that the fire was contained to the north bank of the River Thames, and Southwark was spared. Throughout that Sunday the fire pushed westwards, driven across London by winds coming from the storm in the east. Some of the city’s streets were so narrow that the upper floors of buildings on either side were almost touching each other, and the fire spread effortlessly. 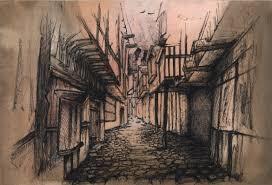 An impression of how London's streets looked in 1666

Panic reigned in London. In the east, terrified residents ran down to the river bank in a desperate attempt to avoid the flames, while in the more affluent west of the city people were watching the approaching fire and wondering whether they should start to pack their belongings and flee. One such person was Samuel Pepys, who wrote an incredible diary throughout the 1660s which gives us a fascinating first-hand account of the fire. Having observed pigeons flying from the east with their wings alight, Pepys – a clerk of the Royal Navy and of the privy seal - went to Whitehall to approach the King, Charles II, and his brother James, Duke of York. Charles flew into action, ordering the immediate demolition of buildings on the edge of the fire in an attempt to stop its spread. However, the strength of the wind was so great that the fire was able to bridge gaps so large that even the demolition of 20 or so buildings was not enough to contain it. This being a time where God and the supernatural was very real in people’s lives, it must have felt as though London had become hell itself. Pepys began to pack.

By the early morning of Monday 3rd September refugees were streaming out of the city, and the ineffectual mayor was directing fruitless efforts at demolishing buildings. Later that day the Navy had to be called in to donate some of its gunpowder reserves to hasten the building demolition. The Navy obliged, and explosions started to be heard around the city as whole streets were destroyed. Combined with the raging fire this must have been a terrifying experience for the Londoners who were scrambling to get to safety, and rumours started to swirl that the explosions were coming from a French invasion force. London was gripped by hysteria.

On the Tuesday the fire reached its zenith. Londoners who had gathered on the fields outside of the city could see the fire for miles, and smoke was visible from as far as Oxford. Pepys records that the whole of the city was ablaze, and it was on this day that the flames reached St Paul’s cathedral, engulfing its medieval timber and melting its lead roof so that it flowed around the surrounding area like a molten river. While most residents had long since fled the city by now, scores of brave souls remained to fight the blaze – including the King and the Duke of York themselves. Both royal brothers were seen on the frontline of the valiant efforts to calm the blaze, and even the previously useless mayor was now having some success co-ordinating efforts in the north east of the city

Refugees gather by the river and observe the unrelenting fire

The heroism of the King and his firefighters may have calmed the fire somewhat, but in the end the fire just ran out of places to spread. By Wednesday 5th September it had reached the brick walls in Middle Temple and Fetter lane in the west, and workers used this opportunity to demolish yet more buildings to make it impossible for the fire to spread further. At the same time, the wind from the east which had driven the fire so remorselessly started to slacken and was replaced by a wind blowing south, which only pushed the fire towards the river. Though small fires still broke out sporadically, by Thursday 6th September the fire had been extinguished and Londoners were left to take stock of their devastated city. In total, the fire had destroyed four fifths of the city, including around 85 parish churches and all of London’s civic halls. It had also destroyed 13,200 private houses and thousands of businesses, leaving hundreds of thousands of people homeless and in financial ruin. The official death toll stands at a stunningly low six people, however it is impossible to tell if this is accurate or not. The vast majority of residents would have had ample chance to escape the city, but the real death toll is almost certainly higher than six.

As is so often the case in times of tragedy and crisis, the first reaction of many was to look for someone to blame. In the week following the fire, King Charles rode to the fields north of the city to visit the thousands of his subjects who had been made homeless. He assured them that the fire had not been started by a purposeful act by any individual or group, but rather it had been an act of God. The people were not persuaded. While there was no doubt that the fire had started at Thomas Farynor’s bakery in Pudding lane, Farynor swore (as he would) that he had put the fires in his ovens out before retiring to bed that night. The people needed a culprit; better still, a foreign culprit. Various rumours spread that the fire was the work of French, Dutch or Catholic plotters. People belonging to any of these groups were set upon and beaten in the absence of an official verdict on who was to blame.

Fortunately for the Londoners, they would find a willing perpetrator in a French watchmaker named Robert Hubert, who gave a bizarre and unprovoked confession to having started the fire with a gang of colleagues. No one in authority believed his story, which was full of holes and kept changing every time he told it, but it was good enough for the population at large and he was duly hanged. Indeed, the jury at his trial contained three members of Thomas Farynor’s family, who conveniently found him guilty. It was only after his death that it was discovered that it was impossible for Hubert to have been the culprit, as he was not even in England at the time of the fire.

Though the fire was a catastrophe, in the long run it benefitted London massively. The filthy, cramped, disease ridden streets were obliterated by the fire, along with the last remains of the deadly 1665 plague. When King Charles put the architect Sir Christopher Wren in charge of rebuilding the city, the opportunity was exploited to rebuild London in the mould of a European city such as Rome, with buildings erected made of stone and wide open spaces between them. The new London was crowned by the rebuilt St Paul’s cathedral, which still stands today as a testament to the progressive new city that was built on the ashes of the filthy old one. Other memorials include the monument erected on the spot where the fire broke out, and the London fire brigade, which was formed out of the private fire fighting forces that businessmen hired in the aftermath of the great fire.

The old, wooden St.Paul's cathedral was replaced by a modern, stone structure

Today, British schoolchildren are taught about the fire through rhymes and through the diary of Samuel Pepys, and the fire remains in the national consciousness. Perhaps because of the low official death toll and the long-term benefits it gave to the city, it is not remembered as the tragedy that it was. For Londoners in 1666, it truly must have felt like hell on earth.

The monument in London which remembers the Great Fire. Just visible in this picture is Pudding Lane itself

'The Great Fire of London', article by Ben Johnson, published by historic-uk.com