The Covid-19 outbreak in 2020 had many people looking back with a morbid curiosity at the infamous Black Death of the mid-14th Century. But what was the Black Death, and how can it be compared to the new Coronavirus? 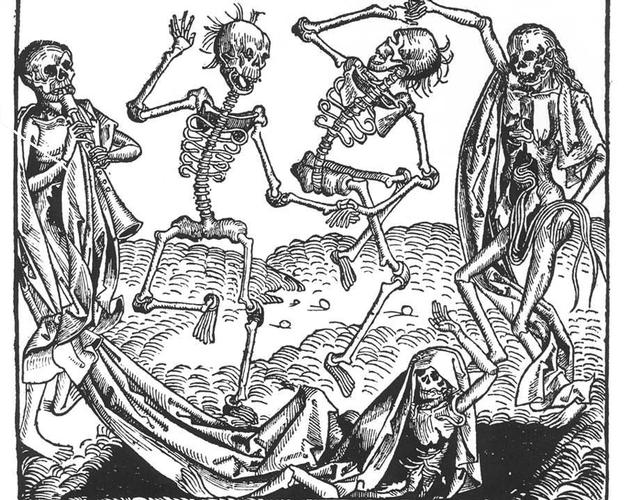 One evening in October 1347, 12 ships arrived in the Sicilian town of Messina from Asia minor. Workers in the port gathered to assist with hauling goods from the ships but were shocked to discover that most of the sailors on board were dead, and the ones who were still living were covered in boils, blood and pus. The ships were quickly ordered out of the port, but it was too late. Within days, the city was gripped by a deadly plague that spread onto the Italian mainland and beyond within a year. The Black Death had arrived in Europe.

The Covid-19 pandemic of 2020 has reminded the world that no matter how much progress humankind thinks it has made, it is forever vulnerable to nature. This is a truth that people living in the 14th century understood more than we do today, as theirs was a world that even without pandemics was rife with disease and early deaths. Even so, the Black Death was different. It is estimated that it claimed more than 100 million victims during the 14th century and in the space of only several years may have wiped out half of Europe’s population. It was a disaster on a scale never seen before or since, made worse by the awful suffering it inflicted on its victims before they finally died. Having originated in east Asia, it spread rapidly along trade routes and easily reached the geographical extremities of the known world.

The environments of the 14th century and the 21st century are vastly different but there are undeniable parallels between the pandemics they suffered – a highly infectious disease spreading across an inter-connected world, inflicting untold suffering on victims who do not fully comprehend how or where they caught it.

The black death was a disease that attacked the lymphatic system, causing swelling in the lymph nodes around the armpit, neck and groin. These swellings, described by contemporaries as being as big as eggs, would start to secrete blood and pus, while the victim also started to experience other symptoms such as fever, shivering and aching, before finally dying. The whole process, from infection to death, usually took around a week, and infection was almost always fatal, although there were rare examples of people recovering. The disease originated in rats and other rodents and was carried to humans by infected fleas.

The first sources of the disease causing widespread death come from eastern China in the 1320s. From there, it spread south and west, killing millions in southern and central Asia. Throughout the 1340s European traders who travelled to Asia minor heard rumours of a strange ‘pestilence’ that was sweeping the continent, and by the middle of the decade it had arrived at the Black sea and the eastern Mediterranean. It is impossible to be sure when it first arrived in Europe, but the first recorded cases were in Messina in October 1347, carried there by Genoese traders who had travelled from the Black Sea port of Kaffa, which had been subjected to a besieging army catapulting disease-ridden corpses into the city. In any case, the spread was inevitable.

The Black Death in Europe 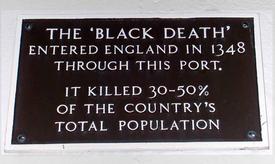 A plaque in Weymouth, Dorset, marks the port where the Black Death arrived in England (wikipedia)

By the end of 1347 the plague had reached mainland Italy, particularly port towns such as Genoa and Naples, and in early 1348 it spread across to France and Spain, propelled by disease ridden ships that were being rejected by Italian ports. That August, the plague was carried on a ship from France to Dorset, and by the end of the year it had ravaged southern England. In 1349 it spread through northern England and Scotland and reached central Europe, racing across modern day Holland, Germany, Austria and Hungary, as well as reaching the western most parts of Europe in Ireland and Portugal. In 1350 and 1351 it made its way to Scandinavia and Russia.

There were variations between different parts of Europe, with regions such as Aragon and Catalonia in Spain enduring a far worse mortality rate than their neighbouring regions, and towns being far worse affected than the countryside. There were also more curious variations, such as the fact that Milan was relatively unmolested by plague while neighbouring cities suffered, Bruges escaped a severe outbreak while other port cities were decimated, and the fact that it took until 1351 for the plague to arrive in Mecca, a Muslim holy city that welcomed pilgrims from all over Asia and Europe.

Europeans had absolutely no idea what had hit them. Many people thought a disease so cruel and unexplainable could only be sent by God, so religious processions and parades were organised in cities across the continent in the hope that it may relieve their suffering. Public displays of penance, such as whipping one’s own back, were common in these parades. People understood the concept that being in proximity to infected individuals made them vulnerable, and towns were deserted by those who had the means to flee to the countryside. Those who could not flee still practised some form of social distancing – doctors refused to see patients, priests refused to administer last rites, business owners shut themselves off and people left their infected relatives to die alone. In this way, the human and economic suffering that the disease inflicted was similar to what the world has witnessed in 2020, albeit on a far smaller scale. Various herbal medicines were applied, but to no avail – anyone who was infected had little hope of survival, and their only comfort was that Pope Clement VI issued a decree that anyone who died before receiving the last rites would still be absolved of their sins.

Clement was fortunate that he received good counsel from his advisors, who kept him isolated throughout the pandemic, but the disease did not care for the titles and prestige of other prominent Europeans. Two successive Archbishops of Canterbury were killed, as well as the English King Edward III’s daughter, Joan, and King Alfonso XI of Castile.

By the time the Black Death subsided in the mid-1350s, somewhere between 40-60% of the population of Europe had been killed, and the population of Europe would not reach its pre-1348 level again until the early 1500s. Of course, surviving Europeans did not know any of this, rather all they knew was that a devastating disease had wiped out their families and friends. They then had to contend with an immediate economic crisis, caused by a shortage of workers and produce, although the subsequent recovery saw a rise in the wages of most workers as there was such a shortage of labour.

There was an immediate surge in anti-Semitism in central Europe after the Holy Roman Emperor accused Jews of spreading the plague. Jewish communities there were subjected to horrific violence and many of the survivors fled to eastern Europe.

The Black Death roughly refers to the time period of 1347-1352 in Europe, but after this the plague did not just go away and outbreaks were still common until the 1700s. However, as the years progressed there seemed to be more understanding of how the disease spread and more effective measures were implemented, particularly with regards to quarantining. For example, authorities in Venice ensured that during plague outbreaks any sailor arriving in their ports was not permitted to enter the city for 30 days. The plague does still exist in the modern day, although anti-biotics and vastly improved global hygiene practises limit its ability to cause widespread damage.

Naturally, when pandemics have broken out in the modern era – such as the Spanish flu pandemic of 1918 and the Covid-19 pandemic of 2020 – there is a tendency to look back with horror at the Black Death and wonder if a repeat of that devastation is possible. The similarities are certainly there, but so are the differences – improved medical and scientific understanding gives us a huge advantage that our ancestors did not have. However, the idea that there are limits to what humankind can do to halt such powerful viruses is not redundant – it remains as true in the 21st century as it was in the 14th century.