A little known story of a passenger ship that sunk in the River Thames in 1878, taking over 650 people to a filthy, watery grave 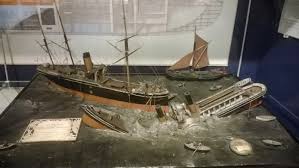 On Wednesday 4th September 1878, boatmen fished around the filthy River Thames, pulling dead bodies from the putrid waters. There was a stench of sewage and death, only made worse by the late summer heat, as the workers hauled the bloated corpses of men, women and children onto their small crafts and returned them to the docks in east London for identification. Less than 24 hours previously, these corpses had been full of life, enjoying a summer’s day by the coast with their friends and families before boarding a small steamship, the Princess Alice, to take them back down the river to London. They were not to know that the steamer was doomed to be sliced in half by a coal ship three times her size, and that over 650 of them would be dragged underwater with her to their deaths.

What makes this story even more tragic is the fact that it has been largely forgotten. Think of British maritime disasters and your mind may go to the early 20th century; to the Titanic, which famously hit an iceberg on her maiden voyage and was claimed by the North Atlantic, or the Lusitania, a passenger liner sunk by a German torpedo in 1915 within sight of the south-west coast of Ireland. You may even think of war ships, such as HMS Hood which was sunk in 1941 at the cost of over 1,400 British lives. Yet the Princess Alice disaster, which saw the largest ever loss of life on a British waterway, has faded significantly from the national memory. It did not serve a propaganda purpose as the Lusitania did during the first world war, nor did its victims of modest means have the fame and glamour of some of the Titanic victims. Their story is not taught in schools, nor dramatised in film. Despite a media frenzy in the immediate aftermath of the disaster and some modest reforms which came as a result of it, by the turn of the century the all-conquering British empire had moved on as if over 650 people had not drowned one evening within a stone’s throw from its capital.

The Princess Alice was originally named The Bute and was launched in 1865 in Greenock, on the west coast of Scotland, to be used as a ferry. It was in 1867 that she travelled south and was re-named, and was again used for ferry service. Tuesday, 3rd September 1878 was no different for Princess Alice than any other day over the previous decade, as she made a routine trip from near London Bridge to Sheerness and Gravesend in Kent. As described by Alice Evans’ article for BBC News, it was an inexpensive trip – about two shillings for a ticket – and most of the passengers on board were working or lower-middle class families from the east end of London, keen to enjoy a day out by the coast before the summer ended. The other people on board included crew, cooks and a band who played jovial music during the journey. The majority of the passengers were headed to the Rosherville Pleasure Gardens in Gravesend, a theme park with attractions including a mini-zoo, while others would have been headed for the promenade on the beach at Sheerness. This was to be a welcome day of relaxation for the many on board who would have rarely had a day off work, and for whom the ability to go for a leisurely day-trip to the seaside was a relatively new and luxurious one.

By 7:40pm, Princess Alice was well into her return journey and approaching Tripcock point, near the north Woolwich pier where many of the passengers were set to disembark. The steamer had well over 700 passengers on board, meaning she was stiflingly overcrowded and there would have been standing room only on her decks. It was standard practise for smaller crafts to hug the southern shoreline at Tripcock point while larger boats stayed at the north side, but unfortunately for Princess Alice the tide had dragged her away from the southern side and into the middle of the river. Tragically, this happened just as a large coal ship (collier) named Bywell Castle, about three times the size of the ferry, was passing by. Although the crews of both ships could see each other in the fading sunlight, there was no way to avoid the collision. 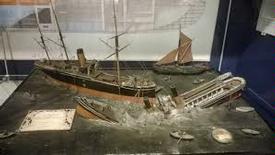 A museum display shows how the larger ship ploughed into the Princess Alice (dawlishchronicles.com)

As crew members on both vessels were frantically trying to avoid each other, the impending disaster was not noticed by the majority on board Princess Alice. While the music from the merry band was still distracting those on deck, food was being served in the saloons and cabins beneath deck to the families who had taken their tired children indoors after a long day of playing in the sun. Most of these passengers were seconds away from death.

Again, we turn to Alice Evans for a description of what happened next. Alfred Merryman, a 30-year-old chef from London’s east end, had stepped out on deck to take a break from his cooking duties. It had been a long and tiring day, but he was glad he had earnt the extra money to help support his wife and four children, who he was looking forward to seeing soon. As he leaned against the saloon door, he noticed with horror the collier bearing down on the steamer. The Bywell Castle careered straight into the Princess Alice’s starboard side, which made a sickening sound as she was sliced into two pieces instantly, dragging anyone unfortunate enough to be in the vicinity down into the polluted water. Merryman later described what followed:

‘The panic on board was terrible, the women and children were screaming and rushing to the bridge for safety. I rushed to the Captain and asked what was to be done and he exclaimed: ‘We are sinking fast, do your best.’ Those were the last words he said. At that moment, down she went.’

As the middle of the ship started sinking, the two ends shot up into the evening sky, sending terrified men, women and children hurtling down towards almost certain death. Meanwhile, those beneath deck and in the saloons stood next to no chance of escaping the doomed steamer as she rapidly took on water. The whole ship had disappeared below the surface within four minutes of the impact, leaving hundreds of people desperately thrashing about in the dangerously polluted water – as it happened, the point of the collision was right next to a sewage pipe, and people were swallowing toxic waste as they screamed for help.

As the sinking had happened too suddenly for the ferry’s two lifeboats to be launched (two lifeboats would have been grossly inadequate in any case), the rescue efforts were led by the crew of the Bywell Castle who threw rope, wood and even chicken coups down into the water for people to cling on to. Around 130 lucky survivors, including the chef Merryman, were hauled onto the Bywell Castle by the rope, but most people were unable to swim to the makeshift life rafts that had been thrown over - if the currents did not drag them under the water, their heavy Victorian clothing did. More small boats approached the scene and the Bywell launched its lifeboats, but the rescue effort soon became a recovery mission as the screams for help were replaced by a deathly silence. Over the coming days more bodies were recovered and taken to docks in east London, where thousands of people waited anxiously for news about their missing loved ones. For weeks, bodies continued to wash up on the banks of the river and the final death toll is understood to be over 650. However, the actual number will never be known because there was no record of how many people had been on board the doomed vessel.

The Princess Alice disaster may have faded from the national memory but this was not because of any explicit effort to sweep it under the rug. The incident was widely reported in the weeks that followed it and an inquest was ordered immediately. A jury of 19 men was convened and inspected the site of the crash and the wreckage of the Princess Alice, which had been raised from the riverbed and beached nearby. By November, the inquest ended with the a few main conclusions:

There were reports in the Times newspaper at the time that a number of men on the jury wanted to bring manslaughter charges against the Captain and senior crew of the Bywell Castle, but not enough for the majority needed.

For years, concerns were raised in Parliament about the need for there to be a positive outcome from the tragedy, and to an extent this was achieved. As a direct result of the incident there were improvements made to the sewage system, rules enacted which made all British ships install emergency signalling lights, and the creation of the Royal Albert Dock which kept small and large vessels separate in the Thames. However, despite the huge loss of life and the furore it caused at the time, the accident was largely forgotten by the turn of the century.

Given the speed with which Princess Alice sank, a lack of lifeboats was not the main reason for the large loss of life that September evening in 1878. However, the concerns expressed during the inquest about the insufficient number of lifeboats arguably should have led to stricter rules in this sense, which would have undoubtedly saved many of the over 1,500 people who went down with Titanic 34 years later. As it was, it is perhaps because of later disasters such as Titanic that the Princess Alice has been forgotten. She carried working-class Londoners rather than business tycoons or aristocrats. She was never labelled ‘unsinkable’, and sank in the putrid waters of the river Thames rather than the icy North Atlantic. There is no glamour in her story or the story of her passengers, and there are no films made about them. The only memorials to them are a plaque in Woolwich cemetery, where her unidentified victims were laid to rest, and a graffiti-marked information sign across the water from London City Airport. 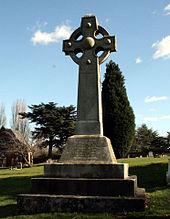 The memorial to the victims in Woolwich cemetery (Wikipedia)