The Great Molasses Flood of 1919

One lunchtime in January 1919, a huge molasses tank did what it had been threatening to do for years, and burst. The result was a terrifying tsunami that swept all before it and killed scores of bystanders 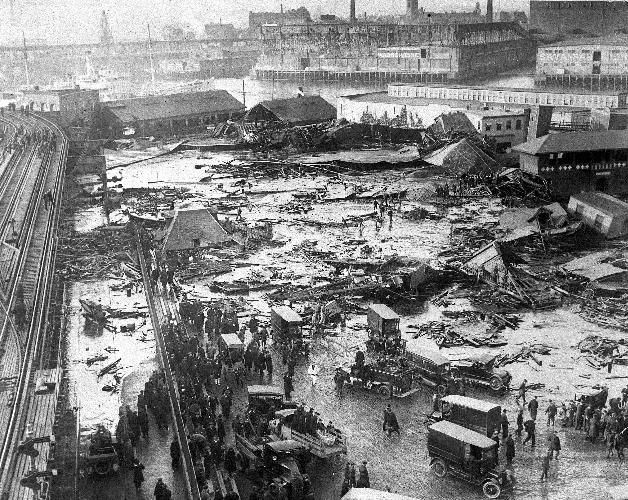 15th January 1919 was a mild day for the time of year in Boston, and as the time approached one o’clock in the afternoon the city’s north end was alive with workers on their lunch break. The air was filled with the usual sounds of an early-twentieth century city – the rumble of trains, the clatter of horses’ footsteps, the distant noise of heavy industry. But some of the city’s more alert residents could hear another noise that afternoon. A quiet, low, consistent growl coming from a factory owned by the United States Industrial Alcohol (USIA) company. From one of its large tanks, in fact. Filled to near capacity with molasses – a sweet liquid used to produce alcoholic drinks and ammunition – the tank had been deemed unsafe by several inspectors but the company had not taken any action to correct this. At one o’clock that afternoon, it finally did what it had been threatening to do for years. It burst.

Over two million gallons of the dark, sticky liquid poured into the streets surrounding the factory in a sweet but deadly tsunami. The event lasted only a few minutes, but the carnage it left behind took months to clear up and years for people to recover from. In all, 21 people were killed and over 150 were injured, making it one of the worst disasters in US history, and certainly the most bizarre.

The tank in question, standing at 50ft tall and with a 90ft diameter, had been built in a hurry during the first world war, as weapons manufacturers increased their demand for the liquid, which could be used in grenades and rifles. Indeed, it had been so hurriedly manufactured that it did not undergo the usual test of being filled with water, and it leaked, creaked and groaned right from the very start. For years, local children would stand by the tank with cups to collect the sweet leaking liquid, as inspectors and workmen repeatedly warned the USIA that it was not structurally sound. The company ignored every single warning.

The war ended in November 1918, leaving the company with a large build up of leftover molasses. Over the following two months they poured it into the large tank to the point where it was nearly full to capacity, and by the middle of January 1919 it was clear to anyone who worked near it that it was not going to hold out for much longer.

The tank was probably going to burst at some point in 1919 anyway, but the fact that it happened on 15th January is probably down to the change in temperature that day. Boston had been gripped by a cold snap for the few weeks before, but 15th January was a much milder day and it is thought that this sudden change is what made the brittle metal finally give way.

Sarah Betancourt refers to the account of a local workman, Isaac Yetton, who was hauling car parts into a shed at around one o’clock when he heard a dramatic snap. He turned round and to his horror saw a huge wave of molasses bearing down on him. He tried to flee, but was easily outrun by the unforgiving wave and carried by it before slamming into a wall. He was saved by an onlooker throwing a ladder down for him to hold onto, but others were not so lucky. According to Chuck Lyons in History Today, a ten-year-old boy was killed when the wave threw a railway carriage on top of him, and a group of firefighters who had been enjoying their lunch break on the ground floor of their engine house were suffocated by the molasses, which spread so quickly and violently into their premises that the building was ripped from its foundations and they had virtually no chance of escape. 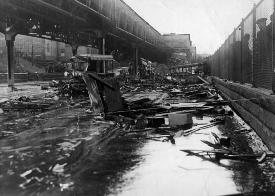 The aftermath of the flood. Just visible here are train tracks that snaked above the streets where the incident occured (history.com)

Molasses is much thicker and denser than water, so it is not accurate to imagine the wave as being similar to a tsunami of water. Rather, it was more like lava flowing from a volcano, slower than water but still too fast for people to outrun and more deadly to anyone it swept up. It was so powerful that it left railway tracks, which had circled above the factory, dangling precariously over the edge of their platforms. The fact that no trains hurtled over the edge is mostly down to Albert Leeman, a brakeman on a train that was passing the area at exactly the moment of the incident. He managed to bring his train to a stop in time, before racing back up the tracks to warn other approaching trains of the danger.

The immediate rescue efforts were conducted by over 100 sailors who had been stationed on a US army ship nearby. Before long the army and all three emergency services were on the scene. They managed to save many people, covered from head to toe in the sticky liquid and struggling to breathe or see, but still clinging to life. As the hours passed, the mission became one of recovery rather than rescue, as workers fished out the bodies of unfortunate people whose airways had been totally blocked by the molasses. The last dead body was recovered four months after the incident. 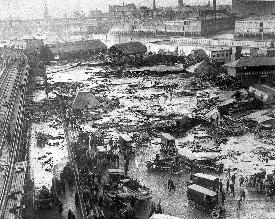 An aerial view of the devastation (wikipedia)

A return of cold weather in the days after the incident caused the liquid to harden, making it even harder to remove. It was a mammoth clean-up operation, involving fire department pumps and powerful hoses spraying sea water at the mess, as saltwater was more effective at breaking the molasses up. The whole city smelt of molasses for days, and emergency workers were covered in the stuff. It was truly a grim scene.

By the summer of 1920, over 100 lawsuits had been filed against the USIA. The company naturally denied all responsibility, suggesting that anarchists had placed a bomb by the tank, but was eventually found liable for the damage. Local prosecutors agitated to have the company charged with manslaughter, but a grand jury declined to indict them. Instead, the USIA came to a settlement in 1925 which saw them pay hundreds of thousands of dollars (multi-millions in today’s money) in damages.

In the years following the incident, authorities in Boston made it mandatory for all construction projects in the city to be signed off by an architect and engineer and checked by city officials. The practise soon spread throughout the country. Some good, at least, came from such a horrible event. But the price the city was forced to pay for that good was too high – 21 people dead, over 150 injured, and untold sums of money in damages and clean-up bills.

‘The Great Boston Molasses Flood’, article by Sarah Betancourt, published by The Guardian (2009)