The Closest Presidential Elections of the Last Century

With the 2020 election just one week away, here's a look at the closest and most controversial presidential elections of the last 100 years 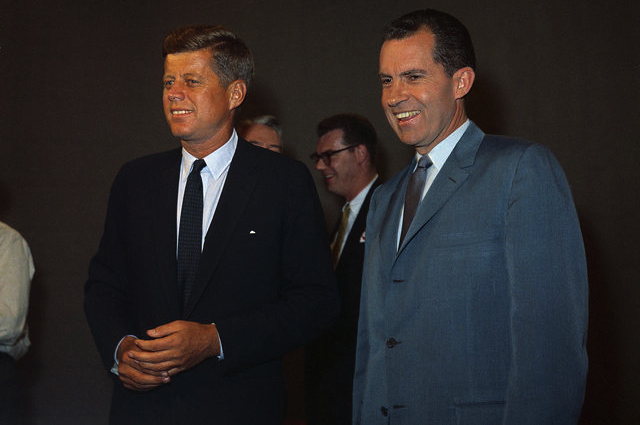 The morning after the 1948 election, President Harry Truman posed for the cameras, proudly holding a copy of the Chicago Tribune in his hands. ‘DEWEY DEFEEATS TRUMAN’ ran the headline. Of course, the headline was wrong – the paper had gone to print before the results were known, and had assumed that the latest polls, which gave Dewey a comfortable lead, were correct.

To be fair, the Tribune was not alone in its assumption that Dewey would be elected. After the end of the second world war, Truman had struggled to deal with a weak economy and was walking a tightrope in a Democrat party divided between northern liberals and southern segregationists. Indeed, Truman’s tepid support of Civil Rights, including the racial integration of the military, had so infuriated southern Democrats that they set up a third party for the election. That party, the ‘Dixiecrats’, nominated Strom Thurmond as their candidate and Truman looked set to lose enough of the south (until the late 1960s, the southern states were staunchly Democrat) to condemn him to defeat.

Truman was widely expected to lose the 1948 election (PBS)

Meanwhile, Thomas Dewey was an impressive candidate. Born in Michigan, he had embarked on a legal career in New York and earned a reputation as an aggressive and diligent prosecutor who had ignored death threats to secure the convictions of several prominent mafia leaders. Elected New York state governor in 1942, he had been selected as the Republican nominee for President in 1944 but had lost to the near-invincible Franklin D Roosevelt. Roosevelt’s death in 1945 left the door open for Dewey to have a second run in 1948 against Truman, a far weaker opponent. 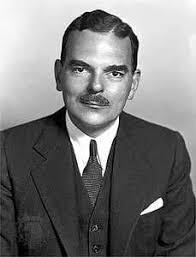 Although Thurmond’s Dixiecrats did indeed win several states in the south, Truman’s aggressive, populist campaign earned him a shock victory. His margin of victory was comfortable in the end – he won 303 electoral college votes and beat Dewey in the popular vote by 4 percentage points. However, the fact that he had been widely assumed to be on the verge of losing as late as election day itself shows how close the election had been.

Truman served a full second term as President and was succeeded by Dwight Eisenhower in 1953. He died in 1972. Meanwhile, Dewey would not get a third run at the Presidency, remaining Governor of New York until 1955. He died in 1971.

JFK was a fairly popular President while he was alive and became spectacularly popular after his death, but this sometimes obscures the fact that he only won the presidency by a razor-thin margin. Kennedy was up against Richard Nixon, who was a few years his senior and had been elected to congress in 1946, the same year as Kennedy. Indeed, the pair had been friends when they were freshly elected representatives, dining at each other’s houses years before they became rivals. 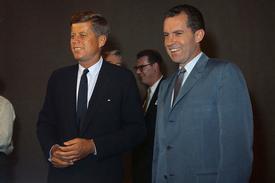 The two men were polar opposites. JFK was the charming and charismatic second son of an immensely wealthy Irish Catholic family, headed by the intimidating patriarch Joseph Kennedy, who himself had been the American ambassador to Britain in the 1930s. Handsome and eloquent, John Kennedy was hard working and talented in his own right but his career had undoubtedly been aided by his father’s wealth and connections. In contrast, Nixon was a painfully shy and insecure man from an impoverished Quaker background in California. Scrapping his way to the top through sheer hard work, ambition, and personal discipline to overcome his natural shyness – in his own words, he was ‘an introvert in an extrovert’s job’ – he came to resent the landed eastern establishment that Kennedy belonged to and always felt he was an outsider in Washington. 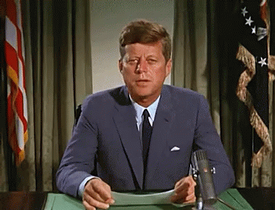 Perhaps the difference in personality between the two men manifested itself most obviously in the infamous first ever televised presidential debate in 1960. Kennedy was perfect for the television age, appearing youthful and energetic on camera (despite the fact that he suffered from chronic illnesses for most of his life), while Nixon looked edgy and uncomfortable, and was noticeably sweating throughout. This difference in appearance was crucial because in truth there was not much difference between the two on policy – in foreign policy both were adamantly anti-communist and anti-Soviet, while domestically Kennedy favoured a slightly more progressive economic and social agenda. Rather than support for a set of policies, the election would be decided on the personal popularity of the candidates. Nixon tried to amplify his record as Vice-President to the extremely popular departing President, Dwight Eisenhower, while Kennedy had to overcome suspicion about his inexperience and his Catholicism.

The election was the closest of the 20th century – Kennedy won the popular vote by a mere 100,000 votes nationwide, giving him an electoral college total of 303 to Nixon’s 219. There were allegations that Kennedy allies had tampered with the vote in key states, and Nixon would come to believe that he had been robbed. This could go some way to explaining his later actions.

Kennedy, of course, would not see out even one term as President. He was assassinated in 1963. Meanwhile, Nixon ran unsuccessfully for Governor in his native California in 1962, before spending the majority of the 1960s plotting his political comeback. He was elected President in 1968 and re-elected in 1972, but was forced to resign in disgrace in 1974 as he faced impeachment for his part in covering up a break-in at Democrat offices at the Watergate hotel in Washington. He died in 1994. 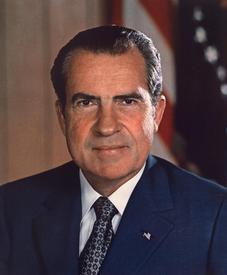 Nixon finally won the presidency in 1968, but was forced to resign in 1974 (wikipedia)

Forget the Russia stuff in 2016 – the 2000 election is undoubtedly the most controversial election of the modern era.

Democrat Al Gore had spent the 1990s as Vice-President under Bill Clinton and secured the nomination of his party without much trouble. He was up against Texas Governor George W Bush, son of Clinton’s predecessor George H W Bush, who fended off challenges from more established Republican figures to secure his party’s nomination.

Despite his scandals, Bill Clinton had been a fairly popular President and his administration was considered to have been successful, allowing Gore to emphasise his contribution to that administration. For his part, Bush campaigned with a folksy, ‘not quite in command of all the facts’ style that endeared him to a significant chunk of the electorate who found it easier to relate to him than the bookish, bland Gore. He also emphasised his evolution from spoiled, alcoholic President’s son to teetotal, born again Christian, securing the influential support of the religious right who had been infuriated by Clinton’s, shall we say, less than moral behaviour in the White House. 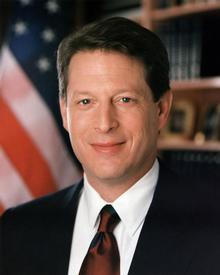 Gore essentially marketed himself as a continuation of the Clinton presidency, while Bush styled himself as a ‘compassionate conservative’ who would push for tax cuts and less regulation but not leave anyone behind economically. The election was hard fought and would lead to one of the closest ever results.

On election night several states were initially too close to call, and eventually the result hinged on results in Florida. It appeared that Bush would win Florida comfortably, putting him on 271 electoral college votes to Gore’s 266, and Gore called Bush to concede. However, hours later the vote in Florida narrowed significantly and Gore called Bush again to retract his concession. What followed was weeks of legal challenges and calls for recounts, as Bush’s lead in Florida hovered around a mere 400-500 votes. Even more controversy was caused by claims from voters in some predominantly Democrat counties that the layout of their ballot paper was confusing and had led them to accidently vote for a third party rather than Al Gore. In early December the US Supreme Court made the hugely controversial decision to halt vote recounting in Florida and declare Bush the winner. Gore, despite the fact that he had won more than 500,000 more votes than Bush nationwide, was forced to concede for a second time. 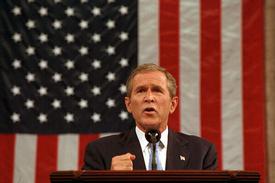 George W Bush would go on to become one of the most consequential Presidents in modern history, sanctioning the invasion of Iraq in 2003 and securing re-election – this time with victory in the popular vote – in 2004. He was also President during two of the worst traumas in American history, the September 11th terrorist attacks in 2001 and the financial crash of 2008. He has kept a relatively low profile since leaving office in 2009. Al Gore retired from front line politics after his defeat and can currently be found working on various climate initiatives.

Another election where the winner of the popular vote did not become President, although not with quite as much controversy as the 2000 election. Hillary Clinton, former Secretary of State and Senator and wife of a former President, up against Donald Trump, the brash New York businessman with no political experience. An easy win for Clinton, right? 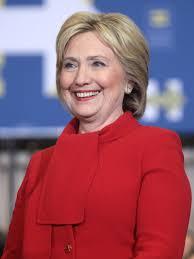 Well, we all know it wasn’t. 2016 was an interesting year in politics. In June, Britain stunned the world by voting to leave the European Union, and it is generally accepted that Trump’s victory later in the year was part of the same phenomenon.

Clinton was the odds-on favourite to beat him, but more astute observers may have noticed that she was in trouble when her planned procession to the Democrat nomination was nearly derailed by an obscure socialist named Bernie Sanders. That she came close to losing the nomination to a man who had spent most of his career on the fringes of mainstream politics showed that she could be vulnerable against a populist opponent. Like Al Gore in 2000 she essentially campaigned on being a continuation of the existing presidency, in this case that of Barack Obama, but it would not be enough. 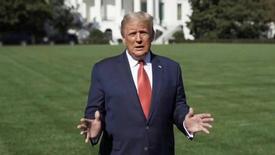 For his part, Trump ran the most wildly unconventional campaign in recent memory, surviving scandal after scandal and filling huge arenas with enthusiastic crowds. But his most effective line of attack was that he was an outsider taking on the corrupt political and financial establishment. He blazed across the ‘rust belt’, a collection of states in the American mid-west who had suffered a decline in industry over the previous few decades, with that very message. It was those states – namely Michigan, Wisconsin and Pennsylvania – that voted for a Republican for the first time in decades and gave Trump his victory, despite losing the popular vote to Clinton by more than 3 million votes.

At the time of writing, Trump is battling with Joe Biden, Barack Obama’s Vice-President, to win re-election. Clinton keeps a fairly low profile, although she has produced some written work attempting to explain her 2016 loss and putting a spotlight on courageous women throughout history.