Tales of the wild west are often invented or exaggerated, but not in the case of one journeyman... 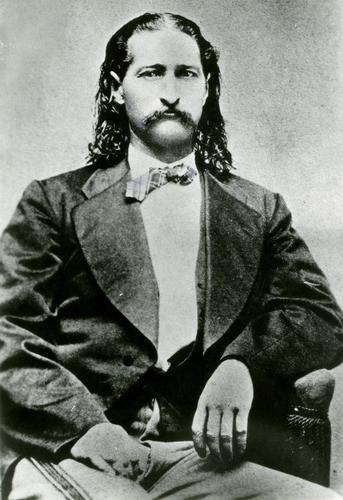 Most people know the legends of the wild west. Wagons and horses, saloons and whiskey, guns and duels. Immortalised by Hollywood, these legends are instilled in popular memory but unfortunately the real people who inspired them are either forgotten or distorted beyond reality. One such figure is James Butler Hickock, better known as Wild Bill Hickok.

If wild west adventure is what you’re after, Wild Bill does not disappoint. He was everything a Hollywood producer could dream up, and more. He was a frontiersman, soldier, part-time lawmen, professional gambler, heavy drinker, and, of course, a killer – of men and bears. Some stories about him may have been exaggerated, but his was still a life full of mayhem and danger. Welcome to the real wild west. Welcome to the world of Wild Bill Hickok.

Wild Bill was born James Butler Hickok on 27th May 1837 in Homer (since renamed as Troy Grove), Illinois. According to the Biographics Youtube channel, he could trace his family back to ancestors who had emigrated from England to Massachusetts in 1635 and ended up in Vermont before Hickok’s father, William Alonzo Hickok, moved the family to Illinois. James was one of seven children – five boys and two girls – born to William and his wife, Polly Butler.

William Hickok was a staunch abolitionist who was involved in the underground railroad that smuggled African Americans from slavery in the south to freedom in the north; indeed, the small family farm in Troy Grove acted as a stop on the railroad. Wild Bill would later claim that he joined his father on smuggle runs and had a few close scrapes with slave owners trying to re-claim their slaves. Whatever the truth of these claims, there is no doubt that by his teens he had proven himself a skilled marksman. This was necessitated by the death of his father in 1852 which meant that he and his brothers were forced to look after the farm and go hunting for food; Wild Bill’s ability to handle guns was proven by the ample food he brought home for the family.

By the time he was 17, Hickok had left the family farm to work on the Michigan and Illinois canal, before joining an increasing number of people who were pushing westwards in search of better opportunities. This push westwards was facilitating the rise of the small towns that would provide the setting for the fabled wild west stories that arose over the next few decades, and it was also raising an uncomfortable question for the United States – should slavery exist in the new western territories?

With his family background this was non-starter for Hickok. Arriving in Kansas – labelled ‘bleeding Kansas’ due to the violence between pro and anti-slavery groups – in 1854, he quickly associated himself with an anti-slavery militia called the Jayhawkers, led by Jim Lane, who was to become a general in the Union army during the civil war a few years later. It was during this time that Hickok saved the life of a young boy who was being beaten by a man. The boy would grow up to become Buffalo Bill Cody, another wild west icon. Hickok’s reputation as a decent and honest man earned him the position of constable in the town of Monticello, Kansas, in 1858. 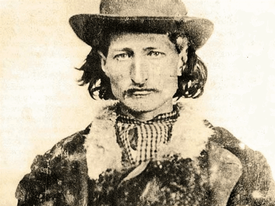 Hickok as a young man

So far, Hickok was living a fairly normal life for a man of his background. But an incredible incident in 1860 set him on the road to being anything but normal. By now he was working for a freight company, and his party came across a bear blocking the road they were travelling. Hickok shot the bear but did not manage to kill it, leaving him in a deathly struggle in which he managed to slit the bear’s throat after sustaining heavy injuries. Bedridden for several months, he was sent by the company to their station in Rock Creek, southern Nebraska, upon his recovery in summer 1861.

Rock Creek station was built on land bought by the company in instalments from a man named David McCanles. When the company missed a payment, McCanles turned up at the station on 12th July 1861 with his cousin, James Woods, and one of his employees, James Gordon. McCanles’ 12-year-old son was also with them. McCanles demanded immediate payment of the money he was owed and when one of Hickok’s colleagues protested that he did not have the money, a struggle ensued. There is no sure way to know exactly what happened, but there only sure facts are that McCanles, Woods and Gordon were all killed, while Hickok and his colleagues all survived and were acquitted of murder because they were judged to have acted in self-defence. McCanles’ son was considered too young to testify at the trial, which was lucky for the defendants – he swore that his father’s party were all unarmed.

Biographics attests that the trial was also the first time James Butler Hickok was officially referred to as ‘Wild Bill’. ‘Bill’ is traditionally the shortened form of William, but a likely explanation of how ‘James’ became ‘Bill’ is that he was already called ‘Wild Bill’ mockingly due to his large nose and upper lip, which his peers decided looked like a bird’s bill. Indeed, Hickok was so self-conscious about this that he purposely grew a large moustache to try and cover it up.

Hickok’s trial was not the most pressing matter on the minds of Nebraskans in 1861. After Abraham Lincoln, who opposed the expansion of slavery, was sworn in as President that year the southern states seceded from the Union and sparked the American civil war. Hickok enlisted in the Union army and was re-acquainted with two old friends – General Jim Lane and Buffalo Bill Cody. Hickok served as a spy, a scout and a sharpshooter during his service and it was during this time that he officially embraced his ‘Wild Bill’ moniker as he could attribute it to his daring war escapades rather than to his physical appearance.

After the war, Wild Bill found himself in Springfield, Missouri. He frequented the poker tables in saloons and developed a rivalry with a fellow gambler named Davis Tutt, a confederate veteran. On 21st July 1865, Tutt took Bill’s watch as payment for a gambling debt and began parading it in front of the townspeople. Incensed by the insult to his honour, Hickok strode to meet Tutt outside the town courthouse that evening. As onlookers parted to each side, the two men faced each other, drew their weapons and fired. Tutt fell dead to the ground, while Hickok was unharmed. This sort of duel has been immortalised in Hollywood movies, but Hickok’s duel with Tutt is one of the only examples of such a contest ever actually happening. In any case, Hickok was swiftly arrested – he had just killed a man outside of a courthouse, after all – but was again found not guilty of murder on the grounds of self-defence.

In 1867 Hickok served under General George Custer in the Indian wars. Custer, who would shoot to fame when he died at the Battle of Little Bighorn in 1876, was thoroughly impressed by Wild Bill, gushing about his outrageous skill with firearms and his domineering physical appearance. The general’s wife, Libbie Custer, gave the alluring description of Bill being ‘a delight to look upon.’ Hickok certainly was a striking man, standing at six feet (very tall for the time) and with an impressive mane of hair that was accompanied by his moustache. He was also fond of fashion and always made sure he kept up with the latest trends. 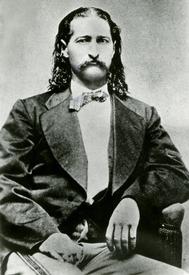 By 1869 Bill was back in Kansas, elected as the sheriff of Hays City. He killed several more men in shootouts before moving on to become Sheriff of Abilene, Kansas, where he killed yet more men in shootouts. It may seem odd that a man of the law was quite happily going around killing people, but one must understand the frontier, wild west mindset. This was an incredibly tough world dominated by incredibly tough men, a world where the only difference between some lawmen and the violent criminals they pursued was that one had a sheriff’s badge and the other did not. It would be unfair to extend this assessment to include Wild Bill, who had a strong sense of right and wrong and only killed those men he deemed threats to law and order, but there is no denying that the man was trigger happy.

However, in 1871 his eagerness to pull the trigger lost him a friend, and his career. Having just come out victorious in yet another shootout, he spotted some sudden movement and instinctively turned his fire in that direction. Unfortunately, the movement had come from his deputy, Mike Williams. Williams was killed instantly. Hickok was dismissed as sheriff and was haunted by the incident for the rest of his life.

Aside from the fact that firing his pistol appeared to be his answer to everything, the Williams incident had also been caused by Wild Bill’s increasingly poor eyesight. Suffering from glaucoma, he was unable to find another job as a lawman and travelled with a wild west show for a while before quitting the show and essentially gambling professionally to support himself.

In March 1876 he married Agnes Thatcher Lake and spent a month honeymooning with her before he headed to Deadwood, South Dakota, a gold-mining town where he hoped to make his fortune. Trying to establish a base so he could send for his new wife, he accepted a position as a peace officer. The town was dominated by rough and often violent residents, but Wild Bill was content for a while and became acquainted with Martha Jane Cannary, better known as ‘Calamity Jane’, who insisted she had a romantic relationship with him. This is disputed by almost all other sources and is more likely an invention of Jane’s famously colourful imagination. 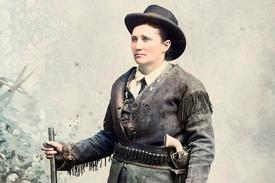 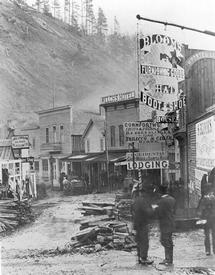 On 2nd August 1876, Wild Bill Hickok was playing poker in a saloon when a drifter named Jack McCall approached him from behind and shot him in the back of the head. Hickok died instantly. The cards he was holding when he was killed – a pair of black aces and a pair of black eights – are known to poker players everywhere as the ‘dead man’s hand.’ McCall was acquitted of murder on the dubious grounds that he was avenging the death of his brother, who Hickok had supposedly shot while he was sheriff in Abilene. He left South Dakota for Wyoming, where his incessant bragging that he was the man who had killed Wild Bill Hickok finally earned him a date with the hangman in March 1877.

Wild Bill Hickok was only 39 years old when he died, but he had fit more into his short life than most people who live to twice that age. He had followed numerous careers, killed numerous men and a bear, survived two murder trials and developed his own legend. The violent manner of his death only further secured that legend. Wild Bill may not be a fantastically well-known name, but his contribution to the popular image of the wild west is immeasurable. Hickok was a flawed man, but he was wild west icon.