Being caught in one atomic bomb attack is bad luck. To be caught in a second attack a few days later is catastrophic luck. To survive both? That's the luck of Tsutomu Yamaguchi... 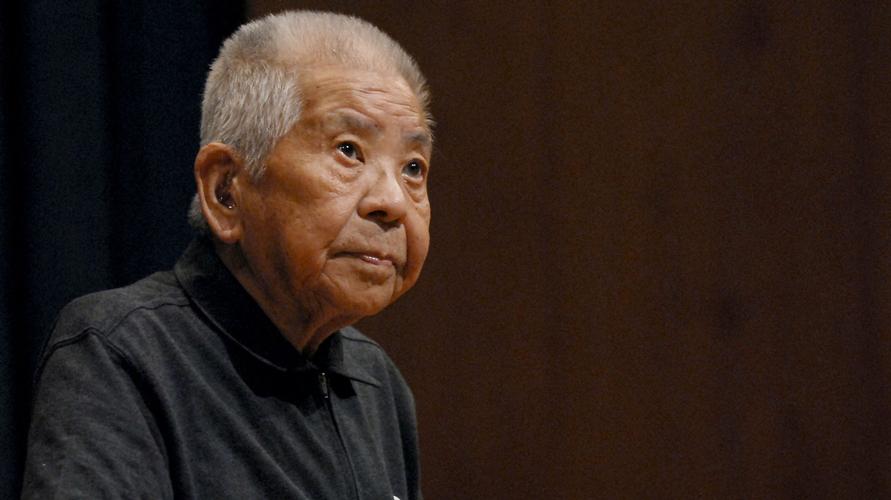 6th August 1945 dawned brightly over Hiroshima, Japan, and 29-year-old Tsutomu Yamaguchi had a spring in his step as he walked to work. He had been in the city for three months on a business trip, designing a new oil tanker for his employer, Mitsubishi, but today was his last day of the trip. As Evan Andrews describes, Tsutomu was looking forward to travelling home to his wife and young son in Nagasaki the following day. Just as he approached the Mitsubishi yard at around 8:15 he spotted an American plane overhead. It was nothing new to see an American plane soar in the skies over Japan, whose own air force had long since lost the ability to defend its skies, but Tsutomu was curious about why this plane seemed to be alone. He was even more curious when the plane released a small object that dropped towards the city with a parachute attached to it. 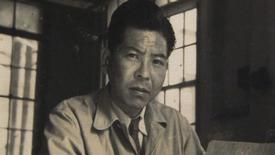 Tsutomu, pictured her as a young man, was looking forward to returning home (Historyville)

His curiosity soon turned to panic, confusion and horror. The sky erupted, an ear-splitting noise pierced the air, and a shock wave threw Tsutomu violently from his feet and onto a nearby potato patch. He had just witnessed the world’s first ever atomic bomb attack – and, incredibly, it would not be the last one he witnessed. Somehow managing to catch a train to his home in Nagasaki the following morning, he arrived in time for the second atomic bomb attack the world had ever witnessed. Unbelievably, he lived to tell the tale – though he did not tell it to many people until his old age. He tried to live as normal a life as possible, but two days in August 1945 ensured his life was anything but normal.

Why were the Atomic bombs dropped?

The US had been developing their new weapon for some years and in the middle of July 1945 President Harry Truman, who had just taken power after the death of President Franklin Roosevelt in April, was informed that it was ready for military use. Truman and most of his cabinet were reluctant to introduce the awful bomb to the world but, even after Nazi Germany surrendered in May and Europe was finally at peace, it became increasingly obvious that Japan had no intention of surrendering to the Allies. War continued in the Pacific, as US troops mounted a desperate campaign of island hopping which gradually edged them nearer to the Japanese mainland. With Japan’s refusal to surrender, President Truman was faced with a terrible choice – risk a full-scale invasion of Japan, likely costing thousands of American lives, or intimidate Japan into submission with the impossibly deadly new bomb.

Truman reluctantly chose the latter option, and after much debate the first two targets were chosen: Hiroshima, an important port city that had so far escaped much bombing and was the headquarters of Japan’s southern defences, and Nagasaki, another important port city.

So it was that as Tsutomu Yamaguchi gazed into the summer morning on 6th August, he saw an American plane fly over Hiroshima and drop a small object that drifted lazily onto the unsuspecting city. 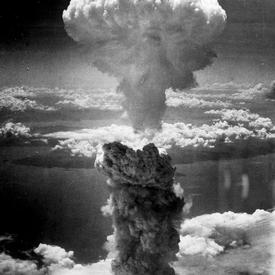 The atomic bomb explodes over Hiroshima (The Conversation)

Tsutomu recalled that he staggered to his feet after the initial blast, his ears ringing and his eyes struggling to adjust to the darkness that had cloaked the city. He had been less than two miles from where the bomb had dropped. He had been badly burned and was surrounded by falling debris and ash, and all he could vaguely see was a mushroom shaped cloud rising high above the city.

He stumbled in the direction of where the Mitsubishi factory had stood, just a few yards from where he had been standing before the bomb fell. The building was gone, but he managed to find two of his colleagues who had also survived the blast. Together, they lay in what remained of a building in the company shipyard, dazed and confused, and in no shape to contemplate walking anywhere. They spent a restless night in their makeshift shelter before emerging the following morning to take stock of the ruined city. Fires raged all around them, bodies littered the streets and the sound of crying was the only thing that interrupted the shouts from rescue workers and the occasional collapse of a building. Somehow, the train station was still operating, and upon discovering this Tsutomu raced to the station with his colleagues and found a train bound for Nagasaki. 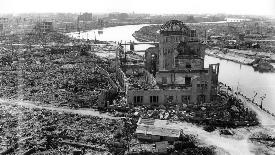 The ruins of Hiroshima in the aftermath of the bomb (PRI.org)

The train was full of injured, sick and just plain confused passengers, and Tsutomu spent another uncomfortable night as it travelled ponderously through the dark countryside. Yet he was also strangely satisfied – he had survived the most powerful bomb attack the world had ever witnessed, he was travelling far from the devastated city and he was returning home to his young family. As far as he was concerned, he had been through a terrible ordeal but a short one that was nearly over. His optimism was, of course, misplaced.

Tsutomu spent the 8th August in hospital in Nagasaki, where he realised the extent of his injuries. He had been so badly burned that his family did not recognise him when he finally returned home that evening (his mother even accused him of being a demon) and he was experiencing what would later be recognised as symptoms of mild nuclear poisoning. Meanwhile, the true horror of what had happened in Hiroshima was beginning to be realised. 80,000 people had been killed instantly and the death toll was continuing to rise every hour, and most of the city’s buildings had been wiped out. Evan Andrews explains that President Truman acknowledged for the first time that the bomb had been atomic, unlike anything the world had ever seen before, and promised to target more Japanese cities if Japan did not immediately surrender. It was a promise he intended to keep.

On 9th August Tsutomu was summoned by Mitsubishi to their Nagasaki office to explain what he had seen. Still severely injured and sick, he reported for duty at around 11 o’clock that morning and tried to explain to his incredulous bosses that it really was a single bomb that had caused all that death and destruction. He was in the middle of this when he saw another sudden flash and instinctively ducked to the floor as the second atomic bomb to hit Japan caused a shock wave to reverberate across the city. Again, Tsutomu was caught within two miles of the explosion, but again, he had survived. This time, it was the re-enforced concrete walls of the Mitsubishi offices that saved him, and he emerged relatively unscathed. His first instinct was to rush home and check on his family, and his heart was in his mouth when he saw his house had been reduced to rubble. But in a remarkable stroke of luck, his wife had been out shopping with their son at the moment the bomb fell. She had been shopping for burn ointment for her husband, meaning that it is entirely possible that she and her son would have been killed if it were not for the fact that Tsutomu had been caught in the other atomic explosion three days previously.

Their home was ruined and they were all suffering from radiation poisoning, but Tsutomu and his family had been lucky – they had all survived, for now. But Tsutomu would have to work especially hard to ensure his long-term survival. Within days of the second explosion, the two doses of intense radiation he had been exposed to brought him to the brink of death. He was lying helpless in a bomb shelter when Japan’s Emperor Hirohito announced their surrender on 15th August, and Tsutomu later remarked that he was far too sick to care one way or the other about the announcement. 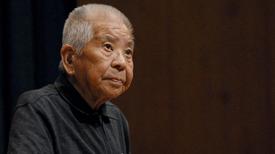 Showing phenomenal strength, Tsutomu gradually recovered. Many thousands had died in the weeks and months after the bombings because of the radiation poisoning, but Tsutomu somehow managed to keep fighting despite his double exposure. He had recovered sufficiently in the space of a few months to work as an English translator for American troops who occupied Japan after the war, before forging a career as a teacher and then returning to Mitsubishi. He, his wife and his son all struggled with health problems for the rest of their lives, but they managed to add two daughters to the family. Tsutomu never talked publicly about his ordeal until the early 2000s, when he wrote a memoir about those terrifying few days. It made him instantly famous, and he joined the anti-nuclear weapons movement. In 2006, he spoke to the United Nations about nuclear disarmament, noting that he felt it was his destiny to do so as the survivor of two nuclear bomb attacks. The address was especially moving because his son had died from cancer the previous year, becoming one of thousands who continued to die from complications arousing from the bombs for decades after they actually fell. Tsutomu himself died in 2010, at the age of 93.

He had tried as hard as he could to lead a normal life, but how normal could life be for a man who survived two atomic bombs? Later in life, he had surprised himself by embarking on a crusade to rid the world of one of its cruellest inventions. There was no one better placed to describe the agony those inventions can cause.

‘How I survived Hiroshima and then Nagasaki’, Tsutomu Yamaguchi, interviewed by David McNeill, published by The Independent (2009)