Paul Revere is famous for riding through the night to warn American rebels about approaching British troops. But less is known about Sybil Ludington, a teenage girl who replicated the feat 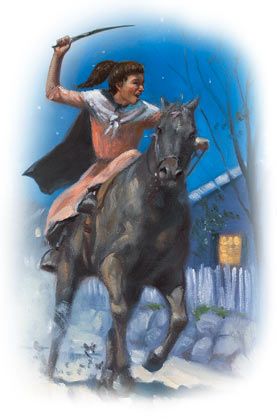 A storm was gathering on the evening of 26th April 1777, as a man desperately spurred his horse to the home of Henry Ludington, a colonel in the American rebel army, near the Connecticut-New York border. Dismounting from his horse and struggling for breath, he barely managed to get his words out, but when he did they sparked an extraordinary sequence of events. The man reported to Ludington that British troops had attacked Danbury, a town 15 miles to the south-east that had reserves of food and weapons for the Continental army. He had come to beg for re-enforcements and Ludington quickly agreed, but there was one problem: because it was planting season, he had already sent his men home to their respective farms. Ludington urgently needed to gather his men, but the messenger was unfamiliar with the area and his horse was exhausted. Ludington himself couldn’t go, as he would be needed at his farm to organise the troops when they started arriving. It seemed as if no one would be able to collect the American rebels to defend Danbury anytime soon,  but there was another person present who would rise to the occasion: Henry’s 16-year-old daughter, Sybil Ludington.

You may have heard of Paul Revere, the man who rode through the night in 1775 to warn American rebels about approaching British troops. But you are less likely to know about Sybil Ludington. She did exactly what Revere did, and then some: she rode twice the distance he did and, unlike him, managed to avoid capture, and her efforts were recognised by George Washington himself. But a combination of gender bias and lack of publicity meant that she faded from the national consciousness, and her heroics were not made the stuff of legend in the way Revere’s actions were.

Sybil Ludington was born in Kent, New York, on 5th April 1761, the eldest of 12 children born to Henry and Abigail Ludington. Henry was a farmer by trade but like many men of the time he also had a military background, serving in the British army in the Seven Years’ War (1756-1763).

Sybil was brought up in a loving household and had a peaceful childhood, growing into a pretty young woman with dark hair and blue eyes, but events in the world around her would disrupt her tranquil existence. Tensions were rising in colonial America as people began to resent the fact that they were controlled by a far away government in London, with no right to representation in that government. In 1773 Henry Ludington disavowed his loyalty to Britain, telling his family that when the inevitable war broke out he would pledge his allegiance to the rebels. The war started two years later, and Henry was true to his word, rising to the rank of Colonel in the Continental army and organising rebel troops in his part of New York state.

Sybil’s ride through the night

When the messenger arrived at the Ludington family farm that spring evening in 1777, Sybil was infuriated at his account of British troops looting the homes of civilians. It is not clear who decided that she would alert the militia men – some accounts claim she decided herself, while others suggest it was her father who asked her to. In any case, she was more than willing to help her father’s cause. By now it was dark and rain had started lashing down, but Sybil mounted her horse, which she had affectionately named Star, and rode at full speed into the night. 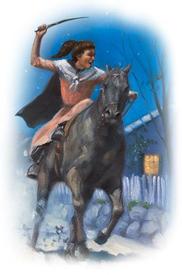 Sybil and Star ride through the night (Pintrest)

It was no easy task to reach the nearly 400 men who were under Henry Ludington’s command, but Sybil and Star rode all night long, covering over 30 miles of wood and farmland. Aside from the poor conditions, Sybil faced the added danger of outlaws and British loyalists who were known to roam the area, and she had only a stick for protection. Still, she courageously pressed on, returning to the family farm as dawn broke the following morning to find hundreds of men gathering under the command of her father. Henry Ludington was relieved and immensely proud of his daughter, embracing her before setting off towards Danbury at the head of his men.

Unfortunately, Sybil’s heroic mission had come too late to save Danbury, and the British troops had already moved to nearby Ridgefield by the time Ludington’s militia found them. Caught by surprise, the British were forced into a retreat back to Long Island, in what was considered a small but important tactical victory for the rebels. It was a victory that would not have been possible without Sybil Ludington.

Did Sybil get the recognition she deserved?

For a short while Sybil Ludington was hailed as a hero by fellow rebels in New York and Connecticut, and she even earned the praise of George Washington, who sent his congratulations and expressed his deep appreciation. However, the war progressed for several more years and Sybil’s actions were overshadowed by other momentous events.

The war officially ended in 1783, and Sybil celebrated the fact that the American colonies had become the United States of America, independent from Britain. The following year she married a young lawyer, Edward Ogden, and the couple settled in New York where Sybil gave birth to their son, Henry. Edward died in 1799, and Sybil used the money he had left for her to buy a tavern, which she ran successfully. She eventually used the profits from this to buy a house for her son and his family. Her son died in 1838, and she followed him a year later, dying on 26th February 1839 at the age of 77. She was buried next to her beloved father. 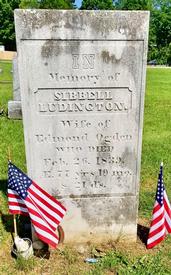 Sybil Ludington is buried next to her father. Her name is spelt in an old way on her gravestone (findagrave.com)

Sybil was mostly forgotten about for the next century. Paul Revere, though certainly a noteworthy man in his own right, had his place in history secured by a publicist, Henry Wadsworth Longfellow, who wrote a poem about his exploits and turned them into legend. Sybil had no such publicity, and seemed doomed to eternal anonymity. However, in 1961 the Daughters of the American Revolution organisation commissioned a statue in her honour, which now stands proudly on the banks of Lake Glenida in New York, just miles from her old family farm. This surge in publicity led to books being written about her, and in 1975, as part of the US’ celebrations of 200 years as an independent nation, a postage stamp was produced in her honour. It may have been late, but finally Sybil Ludington had some degree of recognition for her valiant efforts on a stormy night in 1777. 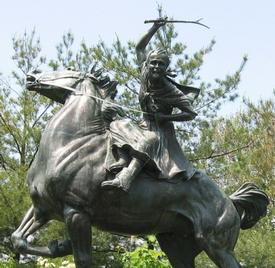 A statue was produced in Sybil Ludington's honour in 1961