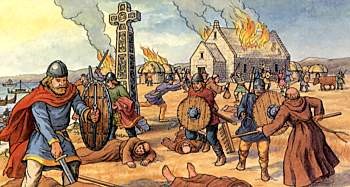 The Vikings. Terrifying, bloodthirsty, skilful warriors who spent much of the 9th century raiding European coastlines and scuttling back to their Scandinavian homes with plunder and hostages. When they weren’t gleefully pillaging foreign lands, they told colourful stories about their gods and mythical figures who were usually depicted as fearsome fighters themselves. One such figure is Ragnar Lothbrok, or Lodbrok, the semi-mythical Norse leader who attempted to invade England and France and was thrown into a pit of snakes by a vengeful Anglo-Saxon King.

Ragnar Lothbrok encapsulated everything the Vikings wanted their warriors to be – fearsome, ambitious, totally unbothered about physical harm or death. His existence is sometimes disputed and the stories about him are exaggerated, but his adventures, as well as those of his three wives and his sons, ensured he had a huge impact on the trajectories not just of the Scandinavian countries but also on the British Isles and beyond.

Probably. As detailed by Josh Butler, the first recorded tales of a man with his name come from Iceland in the 13th century, a good 350-400 years after he was said to have lived. However, the Icelandic myths are corroborated to some extent by Anglo-Saxon chroniclers in England who talk of a fearsome Viking leader named Ragnall or Reginherus, who appeared on the north-eastern coast of modern day England in around 840 and set about terrorising the local area. It is thought that this was the man who became known as Ragnar Lothbrok. There are also references to a man fitting his description from 9th century sources in France and on the Orkney Isles.

It should also be pointed out that the men said to be Ragnar’s sons, namely Bjorn ‘Ironside’, Halfdan, Ubbe, and Ivar – known as ‘the boneless’ due to his paralysis from the waist down – did exist. The sons did their bit to secure their father’s legacy, with Ubbe and Ivar the boneless leading the great Heathen army that invaded England in 865. Of course, the fact that these men existed does not mean that Ragnar existed, but it can be said to add some weight to the idea that he was a real figure.

Ragnar Lothbrok was said to have been the son of Sigurd Hring, the King of Sweden. When Ragnar succeeded him, he conquered much of Sweden, Denmark and Norway, before setting his sights further afield. He is said to have been active in France and Ireland, marauding up the Seine river and forcing the Frankish King to gift him astronomical amounts of silver so that he would not return, and founding a settlement near modern day Dublin. But it is his exploits in England that garner the most attention, as he allegedly attempted to invade with only two ships worth of men and was eventually captured by the Anglo-Saxon King Aella in Northumbria. 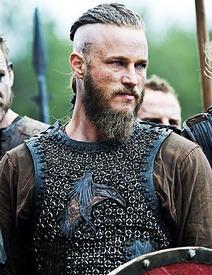 Ragnar Lothbrok as depicted in the History Channel drama 'Vikings'

Norse sagas insist that Aella could not kill him with conventional weapons so was forced to construct a deep pit, which he filled with venomous snakes and threw Lothbrok into. As he lay in the pit, Lothbrok welcomed the idea that he would soon be drinking with the gods in the Valhalla, the Viking version of heaven for slain warriors which translates as ‘great hall’, and predicted that England would soon be subject to a Viking invasion of unimaginable size. Sure enough, in 865 the Vikings did arrive in England with their largest ever invasion force, led by Ragnar’s ‘sons’, Ivar and Ubbe.

The story of Lothbrok and the pit of snakes is almost certainly false, and he is unlikely to have ever met King Aella. The real Ragnar Lothbrok likely spent more time in Ireland, from where he launched sporadic raids on Wales and the north-west coast of England. It is thought that Aella may have ordered the execution of another Viking leader in Northumbria, whose story was absorbed into Ragnar’s by later myth tellers.

According to the sagas, Ragnar had three wives. The first, Lagertha, was a celebrated shield-maiden in her own right who fought alongside Ragnar in battle. He separated from Lagertha and married his second wife, Aslaug, who was the daughter of another formidable Scandinavian warrior and was also a warrior herself. His third wife was Thora, allegedly seduced by Ragnar when he killed a serpent before her.

These wives bore him at least eight sons, a few of whom would become Viking heroes. Bjorn led raids in northern France in the 850s, earning the moniker ‘Ironside’ and even venturing to the Mediterranean in the 860s. At the same time, his brothers Ivar and Ubbe led the great Heathen army that arrived in England in 865 and defeated several Anglo-Saxon armies, killing King Aella and establishing a firm Viking grip on England. The area they controlled became known as the Danelaw and their influence lasted until the Norman invasion of 1066. Ivar is described as a particularly vicious leader who expanded Viking influence in Ireland.

Bjorn, Ivar, Ubbe and their various conquests are all historically verifiable, and they were far more famous than Ragnar until the Icelandic myths of the 13th century championed Ragnar as the protagonist in their stories. If anything, this seems to do them a disservice - all three are said to have acknowledged that they were the sons of Ragnar but that does not mean they owed all their success to him; indeed, it would appear that they were far more successful than he ever was. But this reflects the fact that Ragnar’s myth is more about what he represents than the real man. The real Ragnar probably did exist and roam around northern European coastlines, but his story was swallowed by a myth that absorbed his exploits, and the exploits of various other Viking warriors, to create one central figure who acted as the first Viking leader to expand their territory beyond their homelands, and represented everything an ideal Viking warrior should be.

'Ragnar Lothbrok: the legend of the immortal Viking and his sons', article by Eleanor Parker, published by historyextra.com