You've heard of Hannibal. You may have heard of Vercingetorix. But you probably haven't heard of Rome's other great enemy, who threatened to halt their early expansion... 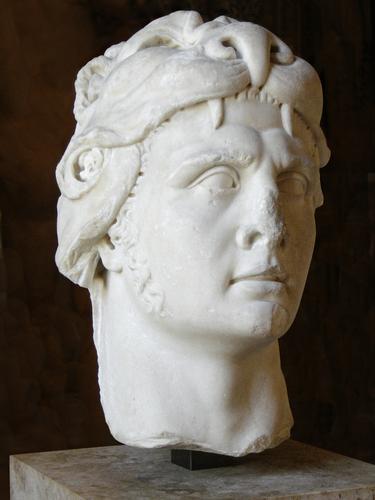 In 63 BC, the King of a large empire on the Black Sea was holed up in his palace as a Roman invasion force closed in. With his own sons having aligned themselves with the Romans, the King had lost all hope and gave poison to his daughters so that they might kill themselves to avoid falling into enemy hands. With them safely in the next life, the King sombrely turned the poison on himself. But it would not work. He swallowed all the poison he had remaining, but it was not enough to kill him. His years of paranoia had seen him swallow small doses of poison to immunise himself against assassins who might use that method and, in a cruel twist of fate, his plan had been vindicated at the exact time he had chosen to take his own life.

This King met a sad fate, ending up having to ask his servants to kill him with a sword. But it was the end of a life that had seen him rule over one of the mightiest empires of the ancient world. This was Mithridates VI of Pontus, an empire that stretched across most of modern day Turkey, as well as parts of modern day Ukraine, Russia, Georgia, Armenia, Bulgaria and Romania. He had overcome his father’s assassination, his mother and brother’s attempts to steal his throne and had conquered lands to expand his empire, but eventually – like so many formidable rulers of his time – found that he was powerless to halt the remorseless expansion of that most famous ancient empire: Rome.

Mithridates was born in Sinope, the capital of Pontus on the northern coast of modern day Turkey, in around 130 BC, to King Mithridates V and his wife, Laodice. According to Joshua J Mark, he was tutored in languages and military studies and was only 11 years old when his father was poisoned. Some accounts allege that Laodice was involved in the plot to kill her husband, while others insist she was hopelessly caught in the middle of a wider power struggle, but in any case she ruled on Mithridates’ behalf as he was considered too young to ascend to the throne himself. During her years of regency, Laodice developed a taste for power and concluded that if she had to relinquish it then it would be to her younger son, who would be easier to control than the independent and outspoken Mithridates.

Fearing for his life, the teenaged Mithridates went into hiding. It was at this time that he started experimenting with small doses of poison in the hope that he could achieve some sort of immunisation, the first example of the paranoia that would grip him for the rest of his life. In around 116 or 115 BC, he returned to Sinope with the support of some nobles and his mother and brother quickly disappeared from the scene – it is certain that he had them arrested, but less certain whether they were executed, murdered, or if they committed suicide. He was welcomed warmly by the people of Sinope, reflecting his ability to connect with his people and rally them around his causes throughout his life.

With his domestic enemies despatched, the young King set about expanding his empire. He sailed across the Black Sea and captured a number of cities in the modern day Crimea, who in turn asked him for help in their conflicts against the Scythians. Mithridates incorporated the conquered armies into his own armies, and set about securing this new part of his empire as well as taking a number of lands all along the coasts of the Black Sea. He then moved south to secure a partnership with Tigranes of Armenia, who married his daughter, Cleopatra, and the two agreed an arrangement where they would deploy their vast resources in different ventures but never interfere with each other’s plans. By around 100 BC, Mithridates had installed a puppet ruler in Cappadocia, modern day Turkey, but this perked the interest of another ancient empire. 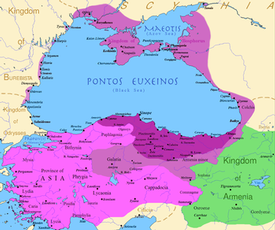 The empire of Pontus at the height of Mithridates' power

Up to this point, Rome was aware of Mithridates’ expansion but not especially concerned. The regions he was conquering were far from Rome’s horizons and they were still struggling to gain total control of their Italian homeland. However, the Roman senate was furious when Mithridates installed his man in Cappadocia and attempted to re-install the previous ruler, who had been loyal to Rome.

Things came to a head in 94 BC, when the King of Bithynia, a region in north-western Turkey, died. Both Mithridates and Rome attempted to install their puppets as replacement, but Mithridates eventually backed down in the hope of avoiding all out war. However, his hand was forced by the Roman consul Manius Aquillius, who had his eye on Mithridates’ empire and was confident of victory. Aquillius invaded Pontus, and Mithridates pushed the pro-Roman forces back and invaded Bithynia. On Mithridates’ orders, in 88 BC Aquillius was paraded on a donkey before being executed by having molten gold poured down his throat, an ironic nod to Aquillius’ desire to capture Mithridates’ wealth.

Mithridates was generally welcomed as a liberator in Asia, where Roman governors were corrupt and implemented crippling taxes on the people. At one point, he sent word that slaves and people in debt should rise up simultaneously and murder their Roman masters. It is thought that over 100,000 Romans in Asia were massacred on a single day in 89 BC, in an episode that became known as the Asiatic Vespers. If they had not been before, Mithridates and Rome were now firmly on a collision course.

War between Pontus and Rome broke out officially in 89 BC and began incredibly well for Mithridates. With Rome still struggling for control of Italy, Roman lands in Asia were woefully undefended and Mithridates was able to capture them at will. That year, he was welcomed into Athens as a liberator and he sent his army across the Aegean Sea to conquer other Greek lands.

However, by 88 BC the Roman Governor of Macedonia had mounted a successful defence against the Pontic onslaught, halting Mithridates’ expansion. At the same time, the new Roman consul, Lucius Cornelius Sulla, arrived in Athens and started re-claiming Greek lands. The consul, known to history simply as ‘Sulla’, would become Mithridates’ arch-rival in the following years. 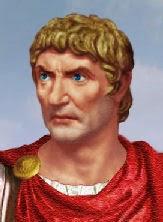 By 85 BC, Sulla had banished Mithridates’ forces from Europe, but was receiving word of domestic enemies plotting against him in Rome. Keen to get back, he arranged a moderate peace treaty whereby Mithridates was required to surrender some of his fleet and all the lands he had conquered, and pay a small fine. Sulla then returned to Rome where he eliminated his enemies and took complete control of the empire, while Mithridates withdrew back to Sinope. Both men had maintained their power, and lived to fight another day.

The second Mithridatic war has a glamorous name that is not befitting of what actually happened. In 83 BC, a rogue Roman governor attacked Pontus, provoking a response from Mithridates, who backed down when ordered to by Sulla. An unexciting event that was given an exciting name.

During the following years, Mithridates adopted a strategy of harassing Rome without engaging in open conflict. Emboldened by Sulla’s death from fever in 78 BC, he strengthened his army and entered agreements with the rulers of Egypt and the Thracians, as well as a rebel Roman governor in Spain. He also allied himself with the Cilician pirates, a violent group notorious for their raids on all shipping in the Mediterranean.

Again, it was a squabble over the succession in Bithynia that sparked war between Pontus and Rome. When the Bithynian King died in 75 or 74 BC, the Romans claimed that he had given them all of his land in his will. Mithridates claimed the will was a Roman forgery and installed his own puppet ruler in the region, setting him on another collision course with Rome.

Unlike the first war, this one started badly for Mithridates, who quickly lost much of his land in the west and was pushed further and further east. The Romans essentially hopped from fortress to fortress, defeating the Pontic forces at each one and conquering the lands around it. By 70 BC, Mithridates’ capital and hometown Sinope had been captured and he was forced to flee to Armenia, controlled by his great ally and son-in-law Tigranes. The Roman general prosecuting the war, Lucullus, demanded that Tigranes hand the Pontic King over. When this was refused, Lucullus invaded Armenia but was dismayed to find that Mithridates and Tigranes had escaped.

Lucullus was replaced by Pompey, Rome’s best general, who set about dismantling Mithridates’ allies in the Mediterranean. While he was doing this, Mithridates marched back to Pontus with an army provided by Tigranes and re-claimed much of his land, including Sinope. Having reached the Black Sea in 64 BC, he urged his son, Machares, to join him as he invaded Roman lands in Europe but was sorely disappointed to find that his son had by now firmly allied himself with Rome. Eternally paranoid, he convinced himself that his son was plotting to overthrow him and so had him murdered.

In 63 BC his other son, Pharnaces, led an army that marched on Sinope with Pompey. Cornered and with no hope of rescue, the formidable Pontic King was reduced to poisoning himself and his daughters. Roman writers found great pleasure in describing how he begged for his slaves to kill him as the poison he consumed had made his arms too weak to hold a weapon himself, and while this is probably a slight exaggeration it still accurately captures his pitiful final moments.

Mithridates was one of Rome’s most formidable enemies, but his stature as such has been eclipsed by the likes of Hannibal and Vercingetorix. This is perhaps due to the western biases of many historians, or perhaps because he never threatened Rome’s Italian heartland in the way that those other men did. Either way, his name is not as well known in history as a man who presided over such a huge empire may have hoped. Mithridates was many things – a liberator, a fierce warrior, a popular leader and a genocidal tyrant all at the same time – but was ultimately elbowed out of history by the might of the Rome. He was not the last person to suffer that fate. 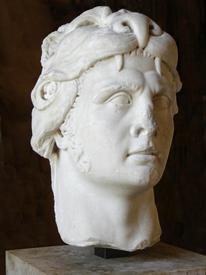 A bust of Mithridates

'Mithridates of Pontus: The poison King of Pontus and aggravation to Rome, article published by ancient-origins.net