Kate Meyrick - Queen of the Nightclubs

London developed a lively nightclub scene in the 1920s, with a diminutive Irish woman at the heart of it 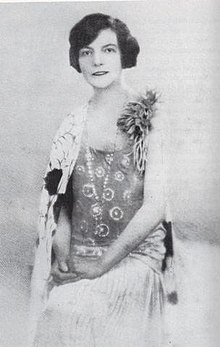 The ‘roaring ‘20s’ is sometimes seen as a uniquely American phenomenon, while Europe emerged gingerly from a catastrophic war that had torn the continent apart. Yet the glamour of New York and Chicago was still matched by some of Europe’s more prosperous cities in the 1920s. Paris was home to a lively jazz scene, Berlin developed a reputation as a wonderfully decadent and sexually liberated city, and London became a hub for hedonism and indulgence among disillusioned war veterans and the more optimistic generation that came after them. At the centre of London’s nightlife was a small Irish woman who ran numerous successful nightclubs, flaunted her wealth and celebrity in front of an incensed British Home Secretary and was mother to eight children. Her name was Kate Meyrick.

Meyrick was unabashedly outrageous. After living a relatively privileged life until her marriage fell apart in 1919, she threw herself in to the murky world of London’s emerging nightclub scene and established herself as its Queen. Unbothered by scrapes with the law, fiercely protective of her workers and immensely proud of her establishments, she basked in the resentment of the British establishment yet still managed to maintain her family’s place at the top of society – two of her daughters would marry into the peerage. ‘Ma Meyrick’ was ambitious, flamboyant and engaging. In 1920s London, that made her exactly the type of person who could make a success of themselves.

Kate Meyrick was born Kate Evelyn Nason on 7th August 1875 in Dun Laoghaire, which was then called Kingstown, near Dublin. As Hugh Oram descibes in his piece for The Irish Times, her father, John, was a wealthy doctor but tragically died when Kate was just one. Her mother, Sarah, found a second husband in a Lancashire clergyman and took her two children with her to England, but died herself when Kate was just seven. Now orphans, Kate and her older sister Ethel moved back to Dublin to brought up by their grandmother. She attended Alexandra College as a teenager and showed early signs of her disregard for normal conventions, claiming that she was the first woman to ride a bike in Dublin.

Kate grew into a petite young woman with a slender frame and striking dark features, and when she was 19 she married Ferdinand Meyrick, who like her father was a doctor. The couple moved to Hampshire in England and settled into a comfortable existence where they could afford to send all of their eight children to elite private schools. Luckily for the Meyricks their sons were not old enough to fight in the First World War but it was still a time of turbulence for Kate, who filed for divorce from Ferdinand in 1910 but was reconciled with him until 1919. Though they separated in 1919, they never actually got divorced.

With three sons at Harrow and three daughters at Roedean, two of Britain’s most elite schools, the newly single Meyrick was facing an uphill battle to fund her children’s education. So, she moved to London and set about amassing her own fortune. In April 1919 she bought a share in Dalton’s, a nightclub in Leicester Square owned by George Dalton Murray, who quickly spotted her potential and employed Meyrick as the club’s manager. Under her management Dalton’s developed a reputation as a brothel with a more friendly touch for troubled young war veterans seeking sex and companionship. This was exactly the case Meyrick made when the club was raided by police in 1920, as she protested in court that the women she employed offered comfort to disillusioned and sometimes disfigured men who had returned from war. Her protests did not work, and she was forced to pay a fine and close the club.

If Meyrick was upset at the closing of Dalton’s, she didn’t show it – she was moving on to bigger things. In 1921 she opened the 43 club in Soho, which was to become one of 1920s London’s most notorious spots. Amongst a backdrop of jazz music and a never-ending supply of alcohol and drugs, it was in the 43 club that aristocracy mixed with the newly wealthy, where royalty mixed with up-and-coming gangsters. The club was frequented by royalty from all over Europe, as well as writers, politicians and even members of the IRA, who headed to the 43 for a night of celebration in November 1921 after stealing a huge haul of munitions from British troops in London. Welcoming this type of clientele did have its risks, but the Meyrick’s diminutive appearance disguised her phenomenal ability to control even the most violent men. Meyrick didn’t care who you were or what your background was – as long as you had a thick wallet and pristine clothes, you were welcome in her club. 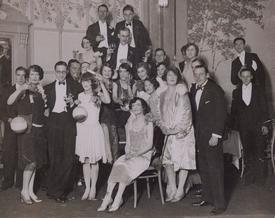 Meyrick founded several other nightclubs in the decade, including the Silver Slipper, the Manhattan and the Folies Bergeres, but it was the 43 that remained the jewel in her crown. Not only did she accumulate a fortune but she became a celebrity, known affectionately as ‘Ma Meyrick’ and facilitating one of her daughters’ marriage to a Baron and the marriage of another daughter to an Earl.

Meyrick’s first brush with the law came in 1924, when she was sentenced to six months in prison for selling alcohol in the 43 club without a licence. Oram describes how the sentence was protested by King Ferdinand of Romania and Crown Prince Gustaf of Sweden, showing the array of glamorous customers she could boast, but the pleas on her behalf fell on deaf ears and she was forced to serve her sentence. In all, she would serve five prison sentences over the next ten years, mostly for licencing offenses.

That year, a new Home Secretary was selected by Prime Minister Stanley Baldwin. Sir William Joynson-Hicks was an austere man who, like many people of his generation who were children of the Victorian age, was worried about the morals of the country in the decadent 1920s. He developed an obsession with the nightclubs that had sprung up across London and was determined to harass them as far as the law would permit, but Kate Meyrick’s clubs, despite the handful of short sentences she served for licencing offenses, always seemed to be out of his reach. In March 1928, he finally found out why.

Sergeant George Goddard of the Metropolitan police had a modest salary but managed to live in a huge townhouse in London and drive two expensive cars. He also happened to be the man who was responsible for keeping an eye on the 43 club. Suspicious, Joynson-Hicks ordered a raid on the club without informing Goddard, and finally found what he was looking for. In 1929 Meyrick was convicted of bribing a police officer and sentenced to 15 months hard labour.

Meyrick was released from her sentence early in 1930, but the world she returned to was very different to the one she had left. While she was in prison, the Wall Street Crash had tanked the global economy and effectively ended London’s nightclub scene for the time being. Struggling to attract customers and facing a police force that had been cleaned up in the fallout of the Goddard affair, Meyrick got herself in more trouble and was returned to prison in 1931. During this sentence she started writing her memoirs, Secrets of the 43, but it was banned almost as soon as it was published in 1933. Too many powerful people had a distinct interest in not having their nightclub antics in the 1920s being common knowledge.

Not that this censorship ever bothered Meyrick – she was already dead. Her years of fast living had left her frail and she contracted pneumonia during her final stint in prison. She died in London on 19th January 1933 at the age of 57 and was buried in Kensal Rise. Her funeral was attended by all of her children and even her estranged husband, who appeared inconsolable during the service.

The story of Kate Meyrick was not a rags-to-riches story, yet it was still one of a woman defying the odds. A single mother in her mid-40s, she could have been forgiven for feeling sorry for herself and devoting her energy to her children. She did devote her energy to her children in a way – she always maintained that paying school fees was the only reason she had gone into the nightclub business – but she had certainly made something of herself in the process. She was shrewd and disdainful of convention, perfectly encapsulating the era she operated in, and a character so colourful and extraordinary as her deserves to be remembered.

'Queen of the nightclubs', article by Hugh Oram, published by The Irish Times (2013)

'The Making of Modern Britain', Episode Four, written and presented by Andrew Marr, published by the BBC (2009)

Copyright 2020 - The Ministry Of History