Performer, activist and military spy. Just a few of the labels that could be attributed to one extraordinary woman 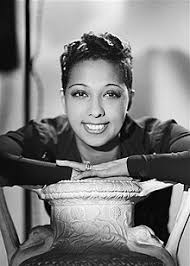 On 15th April 1975, thousands of people in Paris gathered in the cool spring sunshine to watch a funeral procession. The hearse was flanked by a military guard, and policeman were forced to link arms in an attempt to hold the crowds back, while dignitaries at the service in the L'église de la Madeleine (Church of Madeleine) included Princess Grace of Monaco and General Alain de Boissieu, the son-in-law of the late Charles de Gaulle. Given a 21-gun salute, the coffin was removed from the church to be taken to its final resting place in Monaco. If you had been in Paris that day but not known anything about the funeral procession, you could have been forgiven for thinking that it was a high-ranking military figure who was being laid to rest, or perhaps a politician. In fact, the person being revered was not even French. She was Josephine Baker, an American woman who had adopted France as her home and done her part to ensure that France in 1975 was a better place to be than it had been 35 years previously.

Josephine Baker was a woman of many talents. Primarily an entertainer, she was also a civil rights campaigner and a military spy, with her courageous work for the French resistance in the Second World War earning her the military honours she received at her funeral. Born into poverty, she worked her way to be the highest paid entertainer in the world through talent and guile, overcoming no shortage of prejudice in the process.

Freda Josephine McDonald's early life is detailed by Arlisha R Norwood. She was born on 3rd June 1906 in St. Louis, Missouri, to African American parents who performed their way through the segregated south. Her father, Eddie Carson, was a drummer who abandoned his young family shortly after Josephine’s birth, while her mother, Carrie McDonald, was a performer who swiftly re-married and had more children, making it harder for her to earn money. As the oldest sibling, Josephine was forced to miss school frequently from the age of eight to secure odd jobs for herself. By the time she was 10 she had dropped out of school for good and was taking domestic service and babysitting jobs. It was during this time that she developed a love for animals, perhaps facilitated by a childhood that made her mistrust humans, and she would often share her food with a three-legged dog that belonged to one of her employers.

Carrie McDonald may have been forced to give up on her dreams of being a successful performer, but her influence on her eldest daughter was immense. Josephine was dancing almost as soon as she could walk, and started performing on the streets in her early teens to try and earn extra money. It was during this time that she was spotted by a travelling African-American band and she ran away from home with them at the age of 13 to perform at the Booker T Washington theatre in St. Louis, where she had a very brief marriage to a much older man.

New York and the move to France

Through the late 1910s Josephine travelled and performed with a band that toured the east coast of the United States, before settling in New York in 1923 and becoming part of the Harlem renaissance, an African American movement that produced jazz music that proved wildly popular across the world. Josephine was in the thick of it, securing a performing slot at the Plantation Club where she was the most popular act. In the meantime she had married her second husband, Willie Baker, whose surname she would keep despite their divorce after several years.

American jazz was becoming increasingly popular in Europe, and in 1925 Josephine was invited to perform at the La Revue Nègre club in a fashionable district of Paris. Always having a taste for flamboyance, she immediately caught her audience’s attention by appearing on stage wearing only a feather skirt and won their adoration with her energetic performances. That year, she was able to open her own nightclub, the Chez Josephine, and was known to share her dressing room with animals. The following year, she was asked to perform at the fashionable Folies Bergère club where she again showed her talent for capturing an audience’s attention, taking to the stage wearing a skirt made of bananas. She kept her spot at the club and Parisians loved her, while other influential cultural figures such as Pablo Picasso and Ernest Hemmingway lavished praise on her. By 1930, she was one of the highest paid entertainers in the world. 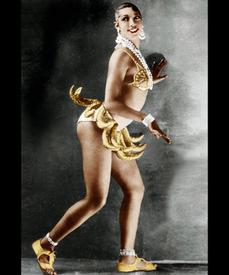 Looking to capitalise on her fame, she launched a singing career in the early 1930s and sang in some of the most famous French films of the era. She was the biggest star in France, and her fabulous wealth allowed her to purchase a large estate in the south-west of the country, but it wasn’t quite enough – despite the glamour of French cinema it was dwarfed by Hollywood, and she still harboured dreams of becoming a star in her home country. In 1936, she returned to the US to try and emulate her success in France but was met with a hostile and racist reception. Heartbroken, she returned to France in 1937 and married a wealthy industrialist, Jean Lion. It was through this, her third marriage, that she gained citizenship of her adopted country.

When Nazi Germany stormed through France and took Paris in the summer of 1940, Josephine worked for the red cross but, most importantly, became involved with the French resistance movement. As a black woman she did not perform much for Nazi officers in Paris herself, but had numerous friends who did and was able to gather information from their conversations with German officers. She would write this information in invisible ink on her music sheets and travel to perform for French and British troops in Africa and the Middle East, making sure her intelligence was given to the right people. After the war she was awarded the Croix de Guerre (military cross) and the legion of honour, the highest order of merit in France, for her efforts.

In 1947 Josephine married for the fourth time, to an orchestra leader named Jo Bouillon. She started adopting children from all over the world and invited the media to her estate to observe what she called her ‘rainbow tribe’, an example of how all races could live together in harmony. She adopted 12 children in total. 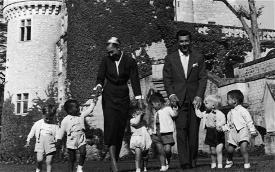 As part of her renewed focus on racial justice, Josephine was keen to lend her support to the American civil rights movement. She travelled back to the United States frequently, refusing to perform in segregated clubs and participating in demonstrations. In one incident in 1951 she filed a complaint against New York’s Stork Club when it refused to serve her, which won her the respect of the superstar actress Grace Kelly, who was soon to become her friend, but also won her a place on the FBI watch list as a suspected communist. The FBI was run by the fearsome J Edgar Hoover at the time, a conservative man who had a tendency to dismiss any protests against racial injustice as ‘un-American.’ Hoover made sure that she was barred from performing in the US and, yet again heartbroken at the rejection of her home country, she went back to France in the mid-1950s. However, in 1963 she returned to America with the help of the Attorney General, Robert Kennedy, who went over Hoover’s head to arrange her homecoming. On 28th August that year, she was the only female speaker at the March on Washington, where she delivered a powerful rebuke to Hoover and his ilk:

"They thought they could smear me, and the best way to do that was to call me a communist…Those were dreaded words in those days, and I want to tell you also that I was hounded by the government agencies in America, and there was never one ounce of proof that I was a communist.  But they were mad.  They were mad because I told the truth.  And the truth was that all I wanted was a cup of coffee.  But I wanted that cup of coffee where I wanted to drink it, and I had the money to pay for it, so why shouldn’t I have it where I wanted it?"

Just moments later, she stood proudly in her free French uniform behind Martin Luther King Jr as he delivered his famous ‘I have a dream’ speech. 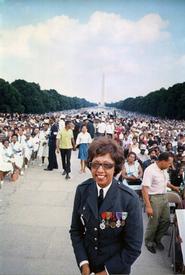 Josephine had retired from performing for the most part by the 1960s, but did not make up for her reduced income by altering her spending habits. By the end of the decade she was nearly broke, and she was forced to sell her vast estate in 1968.

However, she was still world-famous and had friends in influential places, so in 1973 she was afforded the opportunity to make an appearance at Carnegie Hall in New York, which would go a long way to easing her financial worries. Despite her failing health – she had suffered several heart scares in the previous few years – she nailed the performance and received a standing ovation from a delighted audience. After being discriminated against and rejected by her fellow Americans for her entire life, the adoring reception she received moved her to tears and she wept openly on stage. 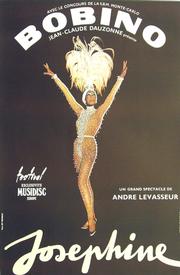 Baker's final show was at Paris' Bobino theatre in 1975

In 1975, a series of performances were organised at the Bobino theatre in Paris to mark the 50th anniversary of her debut in the city. She performed in the opening gala on 8th April, in front of an audience that included Sophia Loren, Mick Jagger, and her dear friend Grace Kelly. Four days later, she did not appear for breakfast as usual and was discovered in bed, dead from a cerebral haemorrhage, her body surrounded by newspaper pages containing the rave reviews of her opening gala that she had spent her final hours reading. She was 68 when she died.

Josephine Baker had come a long way from the streets of Missouri to the height of celebrity in Paris. She had overcome prejudice and economic depravity to establish herself as a world-famous entertainer, and involved herself in noble causes such as resistance to the Nazis and to racial injustice. She had no doubt suffered along the way, but as the curtains came down on her life she could be content that hers had been a life lived to the fullest, a life defined not by words but by actions, and a whole load of dancing.

'Josephine Baker', episode in You're Dead to Me podcast series, hosted by Greg Jenner and featuring Michell Chresfield, published by BBC Sounds (2020)