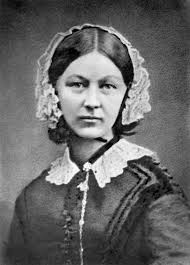 When the Covid-19 pandemic struck in early 2020, the British government implemented a plan to convert exhibition centres in several cities into makeshift hospitals. The hospitals were named Nightingale hospitals, in honour of a woman who is considered the epitome of the selfless, caring nurses that the country was forced to turn to.

The naming of the makeshift hospitals in 2020 shows that Florence Nightingale remains as much a hero today as she was in her lifetime. Born into immense wealth, she sacrificed the life of privilege she could have led as a member of the Victorian upper-class in favour of a life of service. Courageous and kind, she dismissed the conventional wisdom of her time and cared for people who many from her background would never have given a second thought. Her bravery was a social bravery as much as it was a physical bravery.

William and Frances Nightingale were a wealthy English couple travelling Europe on a long honeymoon. Already parents to one daughter, on 12th May 1820 they welcomed a second and named her after the Italian city where she was born – Florence.

By 1821 the Nightingale family had returned to England and set themselves up in two primary residences: Lea Hurst in Derbyshire, and Embley Park in Hampshire. The family were comfortable and William doted on his two daughters, taking a keen interest in their education and tutoring them personally in philosophy and history. But it was mathematics and languages that most attracted Florence’s attention, and by the time she was an adult she could speak several languages fluently including French and German. Her family moved in elite circles, travelling frequently to London during the social season, but young Florence was awkward and struggled to fit in at the fashionable parties she attended. This led to an occasionally testy relationship with her mother, who thrived at such parties and was disappointed that her youngest daughter could not do the same. For her part, Florence thought her mother was overbearing and was happier having intellectual discussions with her father than she was trying to keep up with Frances’ zeal for socialising. 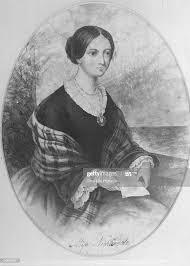 The Nightingales were a religious family and Florence developed a strong sense that it was her duty to help people less fortunate than her. This sense of duty was perhaps enhanced by the fact that her maternal grandfather had been an ardent anti-slavery campaigner. When she was 16, Florence felt she had a calling from God to become a nurse but her parents, though supportive of her education until now, were horrified. Nursing was not a prestigious profession and certainly not a suitable vocation for a wealthy woman. Further, this was a time when young women from respectable families such as theirs were meant to find respectable husbands and settle into a life domestic servitude. Florence’s parents allowed her to care for their relatives and servants when they were poorly in the hope that this would satisfy her ambition, but by 1849 they were forced to relent after Florence turned down a marriage proposal from a gentleman named Richard Milnes. She explained that while she liked Milnes and was sure she would have a happy marriage with him, her conviction that she was called for a higher moral purpose was too strong. Florence Nightingale was determined to become a nurse. 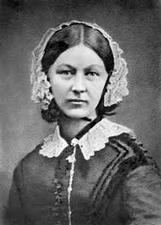 Florence Nightingale as a nurse in the early 1850s.

In July 1850 Florence enrolled at the Institution of Protestant Deaconesses in Kaiserswerth, Germany, for a two-week nursing course, and returned for the same course the following summer.

Now equipped with formal training, she took up a job at Harley Street hospital in London where she worked her way to the position of Superintendent. Florence was a good nurse but her main skills appeared to be as an organiser; she implemented reforms improving hygiene and the general efficiency of the hospital. By the time she was 33, she had developed a reputation as an effective administrator and was weighing up a slight career move that would see her put in charge of the nurses themselves rather than being in charge of medical care.

Events in the world around her would propel Florence on a life-altering course. In late 1853 Britain came to the aid of the Ottoman Empire in resisting Russian expansion into their territory. Thousands of British soldiers were sent to the Black Sea and most of the conflict took place in Crimea, a peninsula connected to the mainland of modern-day Ukraine.

An artist's depiction of the Crimean War. 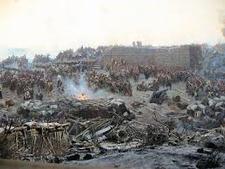 In 1854 the war correspondent William Howard Russell started reporting on the shocking lack of supplies and equipment that the British soldiers faced, and the terrible conditions in the military hospitals that had been set up across the Black Sea near Istanbul. Russell’s reports of inadequate resources, ineffective management and complete lack of hygiene were splashed across the London Times and the public were outraged. Florence Nightingale read the reports with increasing concern and eventually wrote to her friend, Elizabeth Herbert, asking her to encourage her husband, the secretary of state for war Sidney Herbert, to let her lead a team of nurses and care for the wounded British soldiers. The letter need not have been sent, because at the exact same time Sidney Herbert, under immense pressure from an angry British public, had already written to Nightingale asking her to do exactly that.

Nightingale and her team of 38 female nurses arrived at the hospital in Scutari on 5th November 1854 and were shocked by what they found. There were next to no bandages or soap, the water supply was contaminated, and wounded men were lying on the floor in their own filth as rats scurried around them. A soldier brought to the hospital was far more likely to die from disease than from his initial injury, and the ever-religious Florence described it as a literal ‘hell.’

Florence and her team quickly got to work. The first task was a thorough clean of the building, followed by the purchasing of much needed beds and supplies with money granted to her by the British government, enlisting other women (mostly military wives) and less severely wounded soldiers to help with laundry and implementing strict standards regarding cleanliness, regular meals and the discarding of dirty equipment. She also oversaw improvements in the mental health of the soldiers, allowing recreation time for recovering men and helping them write letters to their families. 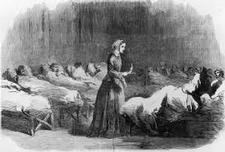 The 'lady with the lamp' drawing that made Florence Nightingale a sensation.

By the spring of 1855, the hospital had been completely turned around and the death rate fell by about two-thirds, a hugely impressive figure if not as impressive as the ludicrous claims by the government that the hospital’s mortality rate had been reduced to just 2%. Still, though those claims have been disproven now they were printed as fact in 1855 and Florence received most of the credit. Known for her nightly walks through the wards, a picture was published in the Illustrated London News on 24th February 1855 of Florence attending to the soldiers with a lamp in hand, earning her the nickname ‘the lady with the lamp.’ She became a sensation, thanks in no small part to her sister who gleefully fanned the flames of her stardom in London, and songs and poems were recited about her in every British city.

Florence was all the more admired given her wealthy background. One could perhaps see this negatively, given that she was not the only woman who ventured east yet she was the only one who gained such widespread adoration. Indeed, modern historians have highlighted the work of Mary Seacole, a mixed-race woman who travelled to the same war zone with no formal assistance and made similar contributions yet went largely unappreciated. But a focus on Florence’s class need not be entirely negative. This was a woman who did not need to do what she had done, a woman who could have easily led a comfortable lifestyle in England and not cared for the plight of her countrymen in some far away land. Yet she sacrificed all her privilege to look after thousands of filthy, predominantly working-class soldiers and made a meaningful impact. Many of the soldiers who managed to return home would never have done so without Nightingale’s intervention, and she earned their undying appreciation.

Later in 1855, Nightingale tried to work in the war zone itself in the Crimea but was struck down by an illness that would leave her in pain for the next 25 years. On 30th March 1856 the war was brought to an end by the Treaty of Paris, and Florence returned to her family home in Lea Hurst on 7th August.

In September 1856, a delighted Queen Victoria and Prince Albert invited Florence to visit them at their holiday estate in Balmoral. The Queen presented her with an engraved brooch and granted her £250,000, an astronomical sum of money at that time. Nightingale used this money, as well as money donated by an adoring public, to set up the Nightingale school of nursing at St. Thomas’ hospital in London in 1860. The school helped to legitimise the nursing profession, particularly for affluent women.

Confined to her bed for long periods as a result the illness she caught in Crimea, she turned her attention to writing and data. She wrote pieces on how hospitals could be improved but also on how the best place to care for sick people was in their home, and organised teams of nurses that were assigned to particular districts to care for vulnerable people.

Nightingale’s influence was global. She conversed with American generals during their civil war (1861-1865) on how to best maintain their field hospitals, and studied data on sanitation and health in India to advise the British authorities there on major reforms they were implementing.

Florence Nightingale in her old age.

In the last few years of her life, Nightingale received yet more official recognition. In 1907 she was awarded the Order of Merit by King Edward VII and was awarded the freedom of the city of London the following year. She was the first woman to receive both awards. On her 90th birthday in May 1910, she received a birthday message from the new King, George V.

In the middle of the summer she started to feel unwell and died quite suddenly on the afternoon of Saturday 13th August 1910. Aware that the government had offered her a state funeral and burial in Westminster Abbey, her final will graciously turned this offer down. Instead, her family opted for a service at St. Paul’s cathedral in London, before she was finally laid to rest with her parents outside St. Margaret’s church in East Wellow, Hampshire. Four years later, a catastrophic world war would break out but British soldiers – and indeed soldiers of all nationalities – could at least be confident that any injury they sustained would be treated in a hospital that was as clean as possible, thanks to the influence of Florence Nightingale. This is a legacy that survives to the modern day and, as a woman whose only wish was to help those less fortunate than her, this is the only legacy she would have wanted.