Did he slay a dragon? Was he even English? To mark St George's day, here's five things you might not have known about England's patron saint 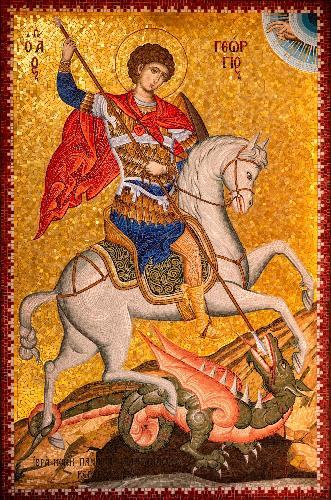 1) George was not English

Not even remotely. He was born at some point in the mid to late 3rd century in Cappadocia, a part of the Roman Empire that was in modern day Turkey. He was likely an officer in the Roman army and died in 303 AD, but stories about his great and good deeds spread across Europe. He was particularly popular with European knights, who thought he represented the best virtues of a soldier.

George had been venerated in England since soon after his death, but it was King Edward I who first adopted him as a patron saint of England in the 13th century. He commissioned Englishmen to search the continent and middle east for relics of George, and had his cross displayed as he went into battle. Of course, the St. George’s cross eventually became England’s flag.

It was Edward’s grandson, King Edward III, who officially designated George as the patron saint of England in 1350.

2) George did not slay a dragon

Obviously. Legend had it that a fearsome dragon stalked a town in Libya, and townspeople were forced to give up their children to quench the beast’s hunger. George was said to have slain the dragon and rid the town of its tormentor.

It’s a nice story, but its completely untrue. It was developed centuries after George’s death. Still, the story symbolises what George was all about – heroism, chivalry, nobility – and represents his real life struggle for good against evil.

3) George was a martyr

He may not have slain a dragon, but he was a brave man. When the Roman Emperor Diocletian ordered a new persecution against the Christians, George refused to recant his faith and make a sacrifice to the Roman gods. He was tortured and threatened with execution, but still would not yield.

There are some wild stories about his ordeals. Some legends say he was tortured for nearly ten years. Others say that he was executed and brought back to life twice. What is known is that he was eventually beheaded for his faith, likely on 23rd April 303AD. That date would become his feast day.

These days, St Patrick’s day is probably celebrated more enthusiastically in England than St. George’s day. But it wasn’t always so.

From the moment George was officially designated as England’s patron saint in 1350, his feast day, 23rd April, was third only to Christmas and Easter as the most important day in the English calendar. Parties and banquets were held in his honour and, in an age when much of Europe was split into regions or city states rather than nations as we would recognise them, the day was a source of great English pride.

But the idea of marking the day faded away after the middle ages, likely because of the English reformation. Protestantism did not venerate its saints as much as Catholicism, and the idea of celebrating a saint’s feast day began to seem outdated and suspiciously Catholic. St George’s Day never regained its popularity.

George is the patron saint of many other places, most notably Portugal, Catalonia, and even Germany! Granted, some of those places hold him in higher esteem than others, but England is not the only place to mark his feast day – indeed, in Catalonia the feast of ‘Sant Jordi’ is traditionally marked with flowers, books, literary recitals and dancing. 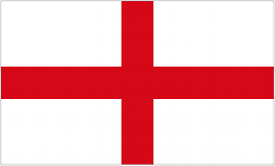 St George's cross is a popular symbol in many regions of the world, and it is England's national flag (flagsoftheworld.co.uk)