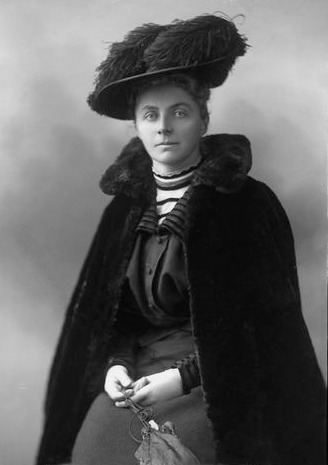 1900 was welcomed across the world as a new dawn, a new century full of unimaginable opportunities and luxury. But for thousands of people in South Africa, the 20th century started in distressing circumstances. Descended from Dutch settlers and known as the ‘Boers’, they found their people at war with the British Empire and found themselves homeless and hastily placed in large camps built by the British army. The camps were not designed to harm their occupants, but a combination of disinterest and incompetence on the part of British soldiers ensured that they soon became venues of death, disease and misery. The world was introduced to a new term – concentration camp. It was one of 20th century Britain’s more dubious inventions.

In the midst of the camps was an English activist who was determined that the people back home should know what was being done in their name. Emily Hobhouse had lived a relatively quiet life for her first 35 years, but had found her calling as a campaigner and had travelled to South Africa after hearing frightening rumours about the camps that her country had constructed. Her efforts to tell the British people about the true nature of the camps were initially supressed by Westminster, but before long her reports had caused exactly the outrage and demand for change she had intended to instigate.

Emily Hobhouse was born on 9th April 1860 in Liskeard, Cornwall, to parents Reginald Hobhouse and Caroline Trelawny. She was educated at home with her brother and sister and lived with her parents until she was 35, helping her father, a Reverend, with his duties in their local area. The family were liberal and very socially conscious – Emily’s brother, Leonard, became a philosopher and early champion of universal voting rights (that is, voting rights not just for property owning women, but for men and women of all social classes).

Reginald died in 1895, and Emily appeared to find a new lease of life upon his death. That year, she travelled to Minnesota, where many families from Cornwall had settled, to provide assistance for those who had fallen on hard times and join the growing temperance movement in the US. 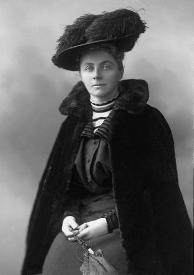 Emily Hobhouse, pictured around the turn of the century (wikipedia)

Upon her return to England in 1898, Hobhouse joined the South African Conciliation Committee and it was through her association with this group that she found out about the camps that British army had set up for displaced Boer people. As a committed liberal she had always been opposed to Britain’s war with the Boers, which had started in October 1899 after the British government decided it no longer wanted to be diplomatic with the Dutch settlers who had always resented the British presence in South Africa. The Boers were no saints themselves, and one of their main reasons for resenting British presence in South Africa was the fact that the British Empire had abolished slavery and generally encouraged the granting of civil rights to non-Boer (mainly British) people and even some native Africans, but in any case Liberals in Britain saw the war for what it was – less a moral crusade against racist Boers, more a land grabbing exercise and flexing of the Empire’s muscles. 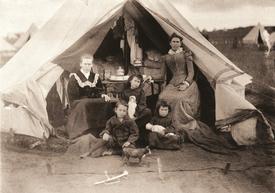 The war started well for Britain, who by the middle of 1900 had captured all the key Boer cities, but the war was prolonged by skilful Boer soldiers waging a new, guerrilla warfare in the difficult South African terrain. It was a kind of warfare that the British army, who in a tactical sense had not evolved terribly far from the Napoleonic wars one hundred years previously, was totally unprepared for. Frustrated at the turn of events, the British army started destroying Boer settlements and land in an attempt to demoralise them and starve them of supplies. The question for Britain then became – what to do with all the Boer civilians, whose homes we have just destroyed? But the British commander in the war, Lord Horatio Kitchener (later of ‘your country needs YOU’ fame) had a clever solution for that. Boer civilians would be placed in camps, where they would be provided with food and shelter. Problem solved. Right?

Wrong. The camps swiftly turned into a disaster. This was not by design, but just by the British army’s sheer incompetence and indifference to the plight of the people they were accommodating. Food was short, disease was rife, and in the hot South African summers the lack of clean water became too much to bear. The average death rate in the camps was a shocking 24%, meaning that nearly one out of every four people taken to the camps would never leave them alive. Most of these fatalities were women and children, forced from their homes and into the camps because of the squabbles of the men around them. In total around 28,000 Boers died in the camps, of whom over 20,000 were children.

That toll would almost certainly have been worse if it were not for Emily Hobhouse. After hearing worrying reports about one camp, she decided to travel to South Africa to see for herself what the British army was up to. Arriving in Cape Town in December 1900, she was shocked to learn that there was not just one camp in operation, but over 30 camps spread across the country. Straight away she set about improving conditions in the camps, forcing the army to make soap available for every occupant, and, after no shortage of effort, obtaining Kitchener’s permission to carry two railway carriages’ worth of supplies to a camp in Bloemfontein. She travelled to several camps more than once and was horrified to see that every time she returned to a venue its population had increased significantly. With every increase in camp population came an increase in the desperate conditions, but also an increase in Emily’s determination to provide for the refugees. If she could not directly help them herself, she would ensure that she forced British officers to do more than the bare minimum to keep the camp occupants alive and saved countless lives by doing so. 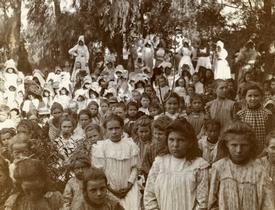 Emily recorded what she had found and returned to England in 1901 to demand an audience with the Prime Minister, the Marquess of Salisbury. But the government in London had no interest in the actions of their army being exposed. Emily was forced to expose them herself. She went to France to get a book on the subject published, and it became an instant sensation. The government was reluctantly forced to set up a committee to investigate the matter, and the ensuing report found that Emily’s observations had indeed been correct. A few months after the war was ended in May 1902, the Manchester Guardian newspaper published Emily Hobhouse’s full reports on the camps in South Africa. The British press was up in arms about what had been done and the government was forced into a humiliating acknowledgement of their error. It was not much, but if it were not for Emily Hobhouse the whole episode would have been brushed under the carpet.

Despite her own declining health, Emily spent the first world war tending to people who had been injured or had lost their homes and livelihoods in central Europe. She retired to London after the war, and in 1921 was the recipient of over £2,000 (a huge sum of money in those days) that had been raised for her by the people of South Africa. She died peacefully in London on 8th June 1926.

‘Concentration camps in the South African War? Here are the real facts’ – article by theconversation.com

‘Emily Hobhouse and the Boer War’ – article by The Guardian