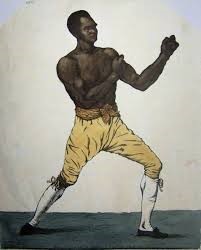 On the sweltering afternoon of 19th July 1821, a celebratory banquet was about to get under way in Westminster hall in honour of the new King, George IV, who had been crowned earlier in the day (as told by Luke G Willliams). In amongst the royal family and fabulously wealthy aristocrats were 18 men who had been invited to the occasion on the merit of their sporting prowess. These were pugilists, or prize-fighters, men who competed in a sport that nominally was the precursor to modern boxing but was more akin to modern UFC or MMA; there were no boxing gloves, and basically no rules.

Banquet guests gasped excitedly as they observed the men, celebrities of their day and in peak physical condition, but there was one man who stood out among them all. Standing at 5’9 (comfortably above average height for a man at the time), he had not an ounce of fat on him and his presence demanded the attention of everyone in the room. Though his face showed signs of age, his torso was immaculately sculpted, and he was in considerably better shape even than the elite fighters who stood next to him. He also stood out because he was black. He was the only black face among a sea of white faces, and guests were fascinated.

This was the famous Bill Richmond. Although he was 57 years old and retired from fighting, he was still the most formidable looking of the men and commanded the respect of the thrilled guests. Richmond’s journey to Westminster that summer afternoon had involved an escape from slavery, thousands of miles of travel, racial strife and a whole lot of fighting. He had earned his place as a well-respected sportsman and was Britain’s first black celebrity. Standing among the elite of British society, he must have felt that this was the pinnacle of a life that had started a long way from the royal banquet.

Bill Richmond's biographer, Luke G Williams, gives the most reliable account for his early life. He was born on 5th August 1763 on Staten Island, New York, to slave parents who worked in the household of Richard Charlton, a wealthy Reverend at St Andrew’s Episcopal church. Charlton resided in the town of Richmond on Staten Island and it is thought that this is where Bill took his surname from. He could have easily been condemned to a life of anonymous servitude, but events in the world around him produced a chance meeting with the man who would change his life.

In 1775 decades of tensions between colonists in America and the British government in London led to the American declaration of independence and the subsequent mobilisation of British troops in New York City, seen as a key port for the inevitable war. As a prominent loyalist Charlton invited the commander of British troops in New York, Hugh Percy, the Duke of Northumberland, to his residence on Staten Island the following year and it was here that Percy was introduced to Bill Richmond. The Duke was dazzled by the boy, who was only 13 but had such physical presence and exhibited such intelligence that Percy knew he had to take him under his wing. Eventually, Percy persuaded Charlton to sell the youngster to him.

At his headquarters in New York City Hugh Percy would often host important guests and one of his favourite forms of entertainment was prize fighting. Having spotted Richmond’s potential as a fighter, Percy organised fights for the boy and before long was picking out some of the toughest soldiers in the British army to test him. The teenage Richmond despatched them easily, and Percy was wildly impressed.

Though a strong abolitionist himself, Percy did not want to antagonise the American loyalists he so desperately needed for the war effort by openly freeing his slave, so he did what he considered to be the next best thing. In 1777, he sent Richmond to England and paid for him to attend school in Northumbria where his ferocious intelligence earned top grades, before arranging a cabinetmaking apprenticeship for him in York when he left school. Cabinetmaking was a highly valued profession at the time, and local people were curious about why a black man had been afforded these opportunities by a high-ranking noble. Not everyone was pleased with his success, and some people were even less impressed when he married a local white woman, Mary Dunwick, with whom he would have several children.

From amateur to professional

Richmond continued his amateur fighting career in York but according to Pierce Egan, a local journalist in the 1790s, at least a few of his fights there came about because of racist insults that were hurled at him. Either way, he soon built a reputation as a formidable fighter, and it was a reputation that would open even more doors for him. Prize fighting was immensely popular in Britain at the time and transcended the strict social class system, with workmen and aristocrats alike keenly attending fights and following the newspaper reports which breathlessly gave details of important fights up and down the land.

Yet it was not until he was in his forties that Bill Richmond would start to fight professionally. William DeLong describes how, having moved to London with his young family in 1795, Richmond met Thomas Pitt, the Lord of Camelford and a former Navy officer. Pitt was an avid fan of prize fighting and hired Richmond nominally to help in his household, but Richmond – who always had a keen eye for social advancement – would spend most of his time coaching Pitt in the art of fighting. The two became friends and would attend fights together, sparring with each other while onlookers marvelled at the natural swagger of Pitt and the pure athleticism and guile of Richmond. By the early 19th century, Richmond was being paid to fight, and his professional career would end with a very respectable record of 17 wins out of 19 fights. Yet even the two losses were losses of the heroic variety, gaining Richmond even more respect. The first came in one of his first professional fights in 1804, where he squared off against George Maddox. Maddox was undefeated and would typically win victory against other opponents in a couple of rounds, but Richmond managed to take him on for nine rounds before finally succumbing to defeat. He would eventually beat Maddox in a rematch in 1809, after a colossal 52 rounds, winning 100 guineas for his troubles. He was 45 years old at the time.

His other loss had been in 1805 and would spark one of the most famous rivalries in early 19th century British sport. On a field in Sussex Bill Richmond faced the renowned Tom Cribb, 18 years his junior, and managed to battle him for 90 minutes before Cribb knocked him out. Cribb would go on to become the undisputed champion of British boxing between 1809 and 1822, and Richmond never forgot his loss to the young upstart.

In 1810 he used the money he had earnt to establish a pub, the Horse and Dolphin, just off Leicester Square. It was here that he met Tom Molineaux, a fellow freed American slave who had travelled to England to pursue a prize fighting career. Richmond coached Molineaux and prepared him for two mammoth fights against the now-national champion Tom Cribb, but Cribb won both fights and Molineaux fired Richmond as his trainer. As a result, Richmond lost a large amount of income and was forced to sell his pub.

Richmond fought sporadically in the 1810s but was fully retired by his early fifties. It was during this time that he formed an unlikely friendship with his former nemesis Tom Cribb. After retiring himself, Cribb took ownership of the Union Arms pub, a few doors down from Richmond’s old pub near Leicester Square, and the two former foes would often be spotted drinking together. Indeed, it was in the Union Arms where Richmond was last seen alive. On the evening of Sunday 27th December 1829, he dined with Cribb as he always did on a Sunday before retiring to his home with a cough. He would not live to see the morning. In the early hours of Monday 28th December 1829, Bill Richmond died at the age of 66.

Although Cribb was forced to miss the funeral because of his own illness (he would recover and live until 1848), he dictated a heartbroken eulogy to his friend which was read at the funeral on his behalf. Despite its use of language that would be unacceptable today – his letter routinely referred to his friend as ‘blacky’ and was dotted with unfortunate phrases such as ‘I am not here to say that Billy was white’ – Cribb’s letter was a challenge the racial boundaries that Richmond had faced and that would exist in the world far beyond his time. He scoffed at the idea that ‘colour always makes the man’ and noted that all people, no matter their colour, will eventually meet the same end. Cribb, the fearsome and poorly educated former sailor from Bristol, showed he had a more open mind than most of Britain’s elite. 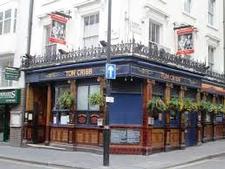 In August 2015, a plaque honouring Bill Richmond was unveiled in the Tom Cribb pub. 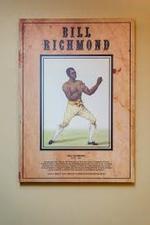 Bill Richmond’s Horse and Dolphin pub has long since been demolished, but Tom Cribb’s pub still stands in the exact spot it always did. In 1960, its name was changed from the Union Arms to the Tom Cribb, and in 2015 a memorial plaque was unveiled in the pub in honour of Bill Richmond. The few people who know this story can look around the pub and imagine Bill Richmond having a drink and a laugh with his friend Tom Cribb. But most modern patrons may look at the plaque and wonder why they have never heard of the man, Britain’s first black celebrity. His name, once respected across the land and listed as a guest of honour at the King’s coronation, has faded from national memory. As unjust as that is, the fact that he was ever famous at all is a testament to this remarkable man. He now resides in the anonymity he was born into, but through sheer talent and intelligence was able to break free from that anonymity in his lifetime. His fame was taken from him, but his achievements cannot be.