A gentle teasing from her brother made Bessie Coleman determined to become a pilot, but she would have to overcome white supremacy and patriarchy in order to get there 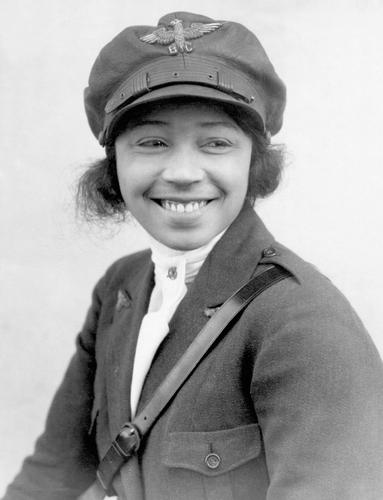 One evening in 1919, John Coleman left a bar and returned to the home he shared with some of his siblings on Chicago’s south side. Of African and Native American descent, he had recently returned from fighting in the First World War in France and had been amazed at how much better non-white people were treated in Europe when compared with America, and how much more freedom European women had compared to their American counterparts. Tipsy from his evening of drinking, upon arriving home he teased his sister about how French women could even fly aeroplanes, something which was inconceivable in America. When his sister suggested that she could be the first woman to fly in America, John chuckled and offered a bitter, painful reply: ‘ain’t no black woman ever going to fly.’

Bessie Coleman would later recall that this was the exact moment she decided to become a pilot. Rejected by American flying schools, she travelled to France and earned her licence before returning to her homeland and impressing huge crowds with her tricks and fearlessness. Nicknamed ‘brave Bess’, she set out to encourage women and non-white men to throw themselves into the exciting new world of air travel. It was a cause that would cost Bessie her life.

From Texas to Chicago

Bessie Coleman was born on 26th January 1892 in Atlanta, Texas, one of 13 children born to George Coleman, a native American farmer, and Susan Coleman, an African American maid. The children attended school, helped in part by their local church, but their strained financial circumstances meant they were all expected to work from an early age as well as study. In Bessie’s case, this meant that from the age of around 10 she helped pick cotton on local farms and did laundry for local families.

Kerri Lee Alexander explains that George Coleman decided to move to Oklahoma in 1901, sending money back to his family who had stayed in Texas. With this money and money she had saved through her childhood, Bessie enrolled to study agriculture at a university for black students in Langston, Oklahoma, but was forced to drop out after just one semester because she could no longer afford the tuition.

After spending five years doing odd jobs in Texas, in 1915 Bessie decided to move north to live with some of her brothers in Chicago. She worked as a manicurist at a local barber shop but her life was changed when three of her brothers were drafted to fight in the First World War in Europe. She waited anxiously for news about them, but also marvelled at stories of the new inventions that were being introduced to European battlefields – especially aeroplanes. Thankfully, her brothers all survived the war and returned home to tell Bessie that they had been treated with respect by French and British troops and local French people, an alien concept for a family who routinely had to contend with vicious discrimination from white Americans. Bessie was certainly struck by this, but she was more interested in what her brothers had to say about the French women they had met. They said women across the Atlantic were more confident than American women and enjoyed freedoms that American women did not - namely, they were allowed to fly aeroplanes.

Bessie makes her own journey to France

While her brothers had travelled across the Atlantic on crowded army ships with the threat of German submarines playing on their minds, Bessie made the same trip in happier circumstances – but only because she was forced to. After resolving to become a pilot after her brother’s teasing, as described by Daniel Slotnik, she wrote to American pilots asking for training but received only rejections. No American pilot wanted to train a non-white person, much less a non-white woman. Despondent, she considered giving up her dream but was nudged in the right direction by Robert Abbot, an African American publisher who she had also written to. Abbot told her that her best bet was to apply to French aviation schools, and after hastily attending evening French classes Bessie managed to fill out the necessary applications for Caudron Brothers’ school of aviation in Le Crotoy, northern France. She was accepted, and, with the help of Abbot and some others, she made her way to the school in 1920. 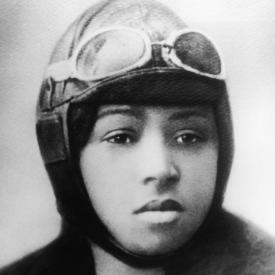 Bessie had worked hard to get into the school, but she would have to work even harder to leave with her pilot’s licence – and her life. Air travel was still very much in its infancy in 1920 and behind each pilot’s glamour and confident smile was a grim knowledge that their life was in the balance every time they took to the skies. Indeed, in early 1921 Bessie witnessed an accident in which one of her fellow students was killed. Undeterred, she threw herself into her education, showing a particular skill for tricks such as loop-the-loops, and was rewarded with a full pilot’s licence on 15th June 1921.

Bessie Coleman’s true ambition was to open a piloting school for people from backgrounds such as hers, but in order to get to that point she needed to generate cash and name recognition. So it was that she embarked on a nation-wide tour, dazzling spectators with her tricks and even walking across the wings of one plane while it was in mid-air. She was the first woman of African American descent to perform a public flight, and America was fascinated by her. White-run newspapers were cautiously supportive, while the black-run newspapers were full-throated in their support for her and unabashed in their pride.

A Bessie Coleman show in is advertised in Ohio (pinterest)

In February 1923 she bought a new plane, a former army plane that had been deemed surplus to requirements, and went to Los Angeles to collect it. While she was there she decided to perform another show, but for the first time it did not go to plan. Her new plane, which had not been used for a few months, suffered engine failure and hurtled towards the earth. Bessie survived the accident but was unable to fly properly for a couple of years. In the meantime, she accepted various invitations to make speeches and give theoretical flying lessons, refusing to accept any speaking engagement in which the audience would be racially segregated. Similarly, when she returned to flying in 1925 she had a famous showdown with a venue in her home state of Texas which insisted on separate entrances for white and black spectators. The two parties eventually worked out a compromise whereby all spectators used the same entrance, but were segregated for the event itself, and in any case both black and white spectators were absolutely thrilled by Bessie’s tricks and daring manoeuvres. 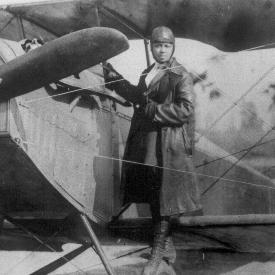 In late April 1926, Bessie purchased a new plane and organised another show for when she collected it from Jacksonville, Florida. On 30th April, the day before the show, she and her mechanic William Wills took the plane for a test spin, with Wills piloting the plane and Bessie sitting, unharnessed, in the passenger seat so that she could lean out and find a suitable parachute landing spot for the following day’s show. Suddenly, Wills lost control of the plane, causing it to flip upside down. Bessie Coleman was thrown from the plane and tumbled to her death, aged only 34. Wills crashed the plane some minutes later and also died. An investigation determined that a wrench had come loose and jammed the engine, throwing the plane into a tailspin.

Though she was well known to every American, the white media focused on the death of the white William Wills, and barely gave Bessie a passing mention. She was, however, widely mourned in the black community. Her body lay in state for nearly a week, first in Florida and then in Chicago, and thousands turned out to pay their respects.

Bessie Coleman never established the flying school she dreamed about, but numerous women and non-white pilots over the years have noted her as their inspiration. That those later pilots are able to fly in far safer conditions is down to the pioneers of Bessie’s generation who took unimaginable risks to make the seemingly impossible possible. Though she was famous in her day, upon her death she was largely forgotten about outside of aviation circles, and there have been only a few tributes in her memory – a postage stamp in 1995, and a few road names near American airports. But those who care enough to find her story are rewarded with one of inspiration, triumph and heroism.