The larger than life woman who hurtled over the edge of Niagara falls in a barrel - What else would you do to celebrate your 63rd birthday? 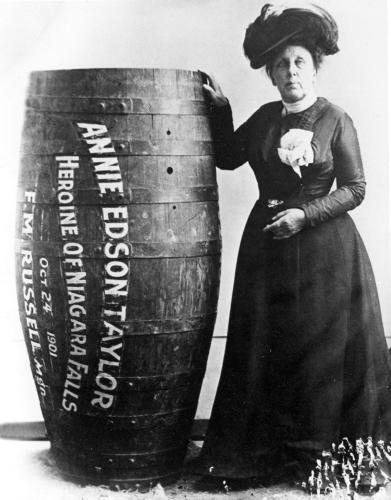 24th October 1901 was a cool, overcast day in northern New York state, but temperatures were about to be raised by a woman attempting a bizarre and dangerous stunt. On this day, her 63rd birthday, Annie Edson Taylor planned to climb into a wooden barrel and be pushed into the Niagara River, where her makeshift vessel would be bumped around by punishing rapids before tumbling over the famous Niagara Falls. Numerous people had attempted different stunts at the falls over the previous hundred years, including swimming, tightrope walking and just simple jumping, and the odds didn’t look good for Taylor; the vast majority had died. There was no way of dressing it up – her plan was outrageously dangerous. Curious onlookers gathered by the falls and wondered why the small, unassuming-looking woman would embark on such a plan, but anyone who knew her knew exactly why she was doing it. Her stunt was very much in character for the interesting and complex Taylor, and her survival that day in perilous circumstances reflected an ability to survive hardship that she had carried throughout her life.

Who was Annie Edson Taylor?

Annie was born as Annie Edson on 24th October 1838, one of eight children born to Merrick and Lucrezia Edson. She was brought up not far from the falls where she would pull off her greatest stunt, and would have surely been aware of the many daredevils who had risked their lives there. Indeed, it is not difficult to imagine that the vivacious young Annie would have gone to see the falls and imagine herself achieving greatness at that very spot at some point in the future. However, she was a woman in the 19th century and as such her dreams of fame were curtailed by societal barriers; she was forced to settle into a rather more boring existence than she had imagined for herself, becoming a schoolteacher when she was in her 20s. Things were not all bad for Annie though, and she met and fell in love with a young man named David Taylor. They married and had a son together, but a double tragedy would leave Annie reeling before she turned 30. In the space of a few years, her infant son died from disease and her husband died while fighting for the Union in the US civil war. Widowed and mother to a dead child, Annie retreated into her shell and was forced to rely on her siblings for financial support.

Over the coming decades she would come to rely particularly on one of her brothers and his wife, who provided a home for Annie when she fell on hard times and were unstinting in their support for her whacky but occasionally brilliant money-making schemes. For the rest of the 19th century she attempted being everything from a teacher to a musician to a dance instructor, in places as far away as Michigan, Texas and Mexico. Again, this was unusual for a woman of her era but Annie’s energy and engaging personality ensured that she found moderate success in whatever field she had chosen to operate in. She found it easy to make friends and business associates wherever she went and people were genuinely drawn to her and her businesses. However, by the dawn of the 20th century she was starting to run out of energy and success. Now in her early 60s and nearly penniless, she returned to New York to be near her brother and sister-in-law and consider her next move.

Annie needed one last big pay day. As she thought about how she could get it, it was announced that an exhibition would be taking place in Buffalo, New York, in October 1901 and it occurred to her that the area would be flooded with tourists. Tourists who, during their stay in New York, may well make the short trip to Niagara Falls. Annie decided that the circumstances were perfect, and an idea to perform a stunt at the falls began to form in her head. She was too old to attempt to swim across the falls or try a tightrope walk, but what if she could be placed in a vessel of some sort? Again, she was too old to try and navigate a boat across the falls, and rowing a boat over the edge would mean certain death. No, it wouldn’t be a boat she would use. She would go over Niagara Falls in a barrel. 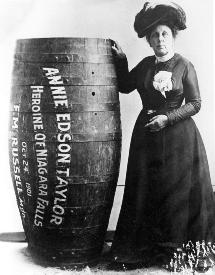 Annie poses with her barrel (wikipedia)

The plan was finalised by the middle of October 1901. Annie would be rowed by a group of accomplices to a spot about one mile upstream from the falls (it would be too dangerous for them to take her further). Here, she would climb into a barrel that had been custom made to fit her five-foot frame, with room for cushion and leather padding to protect her as best as possible from the impact of the fall. The barrel was also fitted with a weight on one end so that it would correct itself if it rolled over and had several emergency air holes, filled with corks that Annie could remove if and when she needed to.

She hired a local circus promoter to promote the event, but they needed to be careful as the stunt was absolutely illegal. On the day she planned to go over, 23rd October, she and her party were commanded to stop by a policeman but they ignored his warnings – the crowds were too big to be let down now. But unfortunately, they were let down – the wind on that afternoon was too strong and the men who rowed Annie down the river decided it was too dangerous to try and launch her barrel – not least because they risked losing control of their small rowing boat and hurtling towards the falls with her. The stunt was postponed until the following day, which just so happened to be Annie’s 63rd birthday.

So it was that at around 4 o’clock on the afternoon of 24th October, which was cool but less windy than the day before, Annie and her accomplices again ignored a half-hearted command from a policeman to halt their journey, and rowed cautiously downstream until they reached the designated launching point. Once there, the men wished Annie luck and she climbed into her barrel with no idea whether she would emerge from it alive or not. The top was screwed shut and extra air was pumped in with a bicycle pump, before the small vent for this was sealed off with a cork. All that was left to do was launch the barrel and watch it bob along the rapids and towards the falls. 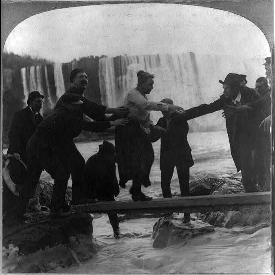 Hundreds of people had gathered on both sides of the river and falls, which in that area acts as the Canadian-American border, waiting to see if Annie Edson Taylor could really survive such a terrifying fall. The barrel was clearly spotted as it went over the edge and hurtled towards the water below, and there was a moment of awful silence as people scanned the bottom of the falls for any sign of it. Sure enough it appeared, and the waiting rescue boat was immediately despatched to retrieve the barrel and get Annie out of it. It took another twenty minutes for the rowing boat to collect the barrel, and still longer for the top to be removed. Incredibly, and to the astonishment and great joy of everyone around, Annie emerged from the barrel, bruised and battered but otherwise fine. Onlookers and journalists scrambled to get a picture of her but she was quickly whisked away by a doctor who was concerned at the cuts and bruises to her head. According to a New York Times article from the day after, she was in a daze when she emerged from the barrel and admitted to having lost consciousness at one point. She spent the next night and day recovering in a nearby hotel, but was allowed to leave by the evening of 25th October and seek a way to make money from her incredible feat.

Did she make much money?

Unfortunately, no. For a month she was the toast of New York and the country, making national headlines and getting paid for public appearances, but it did not last. By the beginning of 1902, she was reduced to hanging around tourist hotspots hoping that someone would pay to have their picture taken with her, and writing a memoir that did not sell as well as she had hoped. She lived the rest of her life in obscurity, reliant on others, and died on 29th April 1921 at the age of 82. 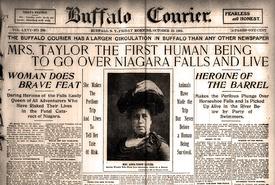 Annie briefly made national headlines. Unfortunately, her fame was not to last (wednesdaywomen)

She may not have achieved the fame and fortune she was hoping for, but her stunt has inspired many a daredevil since. Perhaps more importantly, it was an achievement that capped off an interesting life that had been hindered by hardship, grief and societal barriers but had been a life well lived all the same. Annie Edson Taylor was desperate not to fade into anonymity, and, thanks to her incredible stunt and the people who tell her story, she will not do so.

‘Annie the brave’, article by Patrick Sirianni, published by oakwoodniagara.org (2014)