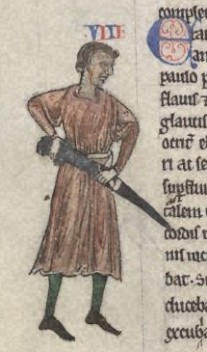 The phrase ‘Norman Invasion’ will almost certainly make you think of 1066 – the Battle of Hastings, Harold and William and their jolly good tussle for the throne of England. The sharper among you may even think of the years after that initial invasion of England – the Doomsday book and the rest of it. But most of you would not have thought that, for the purposes of this article at least, the phrase ‘Norman Invasion’ actually applies to events that took place across the Irish sea and over 100 years after the Battle of Hastings. It refers to the invasion of Ireland led by a Norman noble and a small force of English soldiers. It refers to that small force claiming victory over a much larger combined force of Vikings and Irishmen. And it refers to one woman in particular, who lost her lover in that battle, and took revenge by personally beheading at least 70 enemy prisoners. Its time to get acquainted with the subject of this article, Alice of Abergavenny. Or, to use her moniker – Alice the Vicious.

Actually, we know fairly little about her life before her venture to Ireland. According to the Women of History webpage, we do know that she was a Welsh-Norman woman from Abergavenny, south Wales, that she was of servant stock, and that she was probably in her 20s in 1170 when she joined her lover and around 100 Norman-British soldiers on the trip to south-eastern Ireland. The small force was commanded by Raymond le Gros (also known as Raymond Fitzgerald), a Norman general from south Wales who was ordered to establish a foothold on the emerald isle which, to this point, had remained chiefly under the influence of Celtic natives and the Vikings.

Just as a little detour, it is interesting to note the reason le Gros was ordered to invade. As Ferghal Keane outlines in his BBC documentary The Story of Ireland, a powerful Irish chief, Diarmuid Mac Murchada, was coming under pressure from other Irish chiefs who were unhappy with his, shall we say, heavy handed way of maintaining power (according to Keane, he liked to blind and castrate his enemies so that they couldn’t produce any vengeful children). Mac Murchada turned to the English King Henry II for help, and in doing so changed the course of Irish history.

What happened when the invading force landed in Ireland?

Things did not start well for the invaders. According to Peter Konieczny in Medieval Warfare magazine, they landed at Baginbun Head, near Waterford on the south-eastern coast of Ireland, in the spring of 1170. Even with a support force arriving soon after they numbered only around 100-150 fighting men, accompanied by their womenfolk but no supplies. This meant that they had to plunder the surrounding land for food, which in turn meant they had set themselves on a collision course with the local population.

It was not long before the people of Waterford and the local area banded together a force of around 3,000 Irish and Norse men and headed for the makeshift Norman fort. Though heavily outnumbered the Normans were extremely skilled fighters and years ahead of their foe in terms of tactics and equipment. After early losses, they ground out a victory and fended off their attackers.

But this victory came too late for poor Alice. Her lover was one of the unfortunate Normans killed in the initial onslaught, and she was distraught. Her grief quickly turned into anger, and she waded in to a debate amongst the Normans about what to do with the prisoners they had taken – should they be killed, or be ransomed back to the people of Waterford? Alice insisted that every last one of them must die, and added that she didn’t mind doing the dirty work herself. Her forcefulness and the clear strength of her feeling won the day, and so it was that she personally beheaded each one of the 70 prisoners, before casting their corpses off the cliff face. Even for an era in history far more brutal than our own this was a stunning act of violence, and earned she was christened Alice the Vicious by chroniclers and her contemporaries. 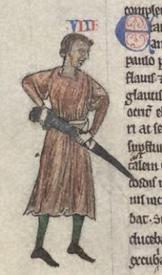 What happened to the Normans, and to Alice?

Raymond le Gros managed to capture the town of Waterford by the end of the summer, and Anglo-Norman forces continued with their gruesome conquest of the island. Over the coming years ever larger forces would make the journey across the Irish sea and claim Irish lands for England. Alice’s stunt in 1170 set the tone for what was a particularly violent conquest, with stories of atrocities committed on the Irish population common, and it marked the beginning of centuries of brutal English/British conquest in Ireland.

As for Alice? Well, very little is known about her after 1170. As a servant girl she was not considered important enough for her life to be kept track of by the chroniclers, and it is likely that she returned to her life of anonymous servitude. But for one afternoon she had been anything but anonymous, and secured her place in history as a result.

‘The Story of Ireland’, BBC documentary written and presented by Ferghal Keane (2011)